Ackerley Brumlow is dead, and the jokester’s long-time friend Ezra still doesn’t know if Ackerley managed to dispose of the sensitive material he’d given him. Other unlikely happenings open Ezra’s eyes to more sinister signs that all is not right in Tendry Spire. Travis Burnham’s supernatural horror is a question of who is strong enough… SY

The evening they buried Ackerley Brumlow the sky was a bloody bruise. Steely storm clouds menaced the north and the air was charged and heavy; the threat of lightning making every breath laborious and wheezy for those attending the funeral.

Though Ackerley had no family to speak of, many of the residents of Tendry Spire were arranged about the coffin, some to pay their respects, some to truly mourn, and some simply at a loss for activity after a Monday’s work.

Many were children, with which Ackerley had an affinity; no surprise as they comprised a majority of his clientele.

At the presiding priest’s last words, Ezra Calogero stepped forward and, scratching his short, shaggy beard, hesitated at the edge of the grave, “Somber words for our resident trickster, wouldn’t you say, Father Robert?”

END_OF_DOCUMENT_TOKEN_TO_BE_REPLACED

A hidden spring holds many secrets key to victory, and one old hermit knows where it can be found. But the journey requires the seekers to face many dangers, not least from the ones who protect it. We’re please to feature Recle E. Vibal’s fantasy, with its flavour of the Southeast Asian fable. We’ve included some links to define some of the words our readers may not know. SY

Lightning illuminated the three men outside Ali’s hut. Rain and darkness had hidden their approach.

“Halt. You cannot proceed.” Ali tried to discern their faces from the shadows and silhouettes dancing from the light of his lamp.

“We need your help, hermit.”

A boy on the water buffalo, a kalis hanging by his waist, emerged from the darkness. Beside him were two men. One was as thick as the water buffalo and towered Ali’s hut. The giant had a kampilan tied to his back, the hilt protruding from his waist and the tip of the sheath appearing from his thigh. The boy’s other companion hid in the darkness because of his skin. A headhunter’s axe was lying on his shoulders. They all hid their faces under a salakot.

“What do you want?” Ali asked.

“The spring,” the boy replied. “The Datu said we would see you here, hermit.”

“The datu of what tribe?”

“Why does Datu Matayog seek the spring?”

“The Datu dreamt a mist of ghosts emerging from the horizon, from the sea. The Babaylan interpreted it as a threat to his sultanate, a war from across the ocean.”

END_OF_DOCUMENT_TOKEN_TO_BE_REPLACED

Edition 15: Notes From the Editor

Backing up from another tremendously successful Special Edition, it’s been great to see the discussions happening around Australian spec-fic authors and settings, and what they have to offer readers. It was gratifying to have some stellar names of the Australian scene on board, and such a pleasure to work with them.

Being nominated for the Australian Shadows Awards created a huge deal of excitement behind the scenes at SQ Mag, and we were so honoured to even be nominated. It was great to see so many wonderful authors lauded, and we’re thrilled to have those we know and respect take home some of these awards (despite rigorous competition). Congratulations to Kaaron Warren (who headlined as part of our last special edition here) for her long fiction, and Dan Rabarts and Lee Murray, finalists in our Story Quest competition for 2013, for a win for their editing the short story collection, Baby Teeth.

On that note, next month the 2014 Story Quest competition opens for submissions. This will be the first year that the competition is run through SQ Mag, which was a move that made sense for us when the winners are published through the ezine. The theme is ‘Punkin’ the Train’, and we’d love to see some wonderful world building around a train-related story. We’re looking forward to see what our ingenious submitters come up with.

END_OF_DOCUMENT_TOKEN_TO_BE_REPLACED

Eric moves to a cabin in the middle of nowhere with his cat, Zombie. In what starts out as a helpful quirk, Zombie’s spider-eating fetish lands her in trouble. Spider rule is returning to the cabin, and Eric may be more than outnumbered…Cindy Hernandez’s story wrapped up the judges and she was named a finalist of the 2013 Story Quest competition. SY

When you live in the middle of nowhere, you’re bound to encounter creepy-crawlies, little creatures that fly, hop, buzz, bite, and chirp. Oh, and spiders. Every cabin in the woods has at least a few. Fortunately, Eric didn’t mind them. Not right away, at least.

Dust filled hammocks of spider webs hung in every corner of the two-room cabin, but he didn’t care. As long as the rent stayed cheap and the roof didn’t leak, the bugs could do whatever they liked. The place was good enough. It was a shabby sanctuary away from the city, away from people, away from everything. His meager belongings sat in the middle of the floor next to the fireplace: his guitar in its battered case, a black plastic trash bag with his clothes inside, and Zombie, his grey and white, battle-scarred cat. Zombie settled herself on the bag of clothes, purring for reasons only known to a cat, and Eric cracked open a lukewarm beer in celebration of their new home.

Zombie developed a real taste for spiders and insects in the days that followed. Entire battalions of them disappeared down her throat. Eric would sit on the front porch in an ancient, splintered rocking chair, drinking beer, while the feline huntress stalked her multi-legged prey. She held no quarter and she took no prisoners.

But she was bound to meet a more formidable foe. Eric was roused from a beer-induced slumber by an odd wailing sound coming from outside. He shielded his eyes from the harsh sun as he opened the door and peered out. Zombie lay next to the rocker, and her growls and hisses were dreadful. She pawed at her face, gurgling and gagging, and Eric caught sight of four inky black, bristly legs protruding from the cat’s mouth. One of Zombie’s victims had decided to fight back.

END_OF_DOCUMENT_TOKEN_TO_BE_REPLACED

Edition 15: To Brave the Mountains by David Bowles

When Saran’s little brother is taken as a sacrifice, she is determined to free him. The only way she can is to radically transform her life, and even then, she may be too late.  SY

The night they took Saran’s little brother from the ranch was like many other nights on the High Plains: the thin, cold wind keened wildly over the meager yellow grass, herding dark storm clouds in a furious stampede westward across the sky to join the thick mist that shrouded the mountains of Chanor. Only a few fat drops of moisture spattered the stony soil of what Plainsmen called the Zuduls, the badlands, their promised country. In the thirty-five years since they had first settled on this vast altiplano, rain had never fallen. The clouds just streamed tantalizingly overhead, and the ceaseless wind moaned as if mocking the Plainsmen’s travails.

Saran had just been lulled to sleep by the banshee crying of that wind when a pounding at the door jerked her awake. Only tragedy could bring someone to our family’s parcel at this late hour, she reflected. And her heart ached with a sudden prescience. For there was a registered skinwalker in her family, one whose ability had just manifested as he reached his twelfth year.

END_OF_DOCUMENT_TOKEN_TO_BE_REPLACED

Edition 15: How Far Will You Go by Carl Alves

Entertainment television has much to answer for, but when Brad Billington heads up a new show, How Far Will You Go, all the rules of civilised society are left by the wayside. SY

“Forget about Survivor and American Idol and prepare yourself for the new frontier in reality television. Get ready for the most extreme, insane game show ever. This is Brad Billington, and tonight you will witness television history as our seven contestants risk it all to win the grand prize of five, you heard me, five million dollars. This is the richest prize in game show history, but it will come at a steep price. Join me, America, as we ask our contestants, How Far Will You Go.”

The camera stopped rolling. The television screen streamed bios of the seven contestants for the national audience. After commercials, the cameras rolled live at the set in Burbank, California where Brad Billington stood in front of the contestants. Brad, a former quarterback at USC, was tall, solidly built, and still in good shape. Before going on the set, he had meticulously made sure his face was clean-shaven and flawless, and his head did not have a hair out of place.

END_OF_DOCUMENT_TOKEN_TO_BE_REPLACED

Alan Baxter is a name that is probably familiar to those of you embroiled in Australian speculative fiction circles. It should definitely be familiar to regulars of SQ Mag since he featured in our last issue. Alan has been around the traps for quite a few years now as the producer of a multitude of short stories as well as the occasional novel. He’s gone stratospheric recently with Harper Voyager picking up his Alex Caine trilogy. Bound is the first instalment, out right now.

END_OF_DOCUMENT_TOKEN_TO_BE_REPLACED

To hear violence night after night is a torment, and most neighbours will seek to stop it before someone gets hurt. What if protecting someone else meant you had to put yourself in the direct line of violence? A finalist from the 2013 Story Quest competition, John Claude Smith chilled the judges with this horror piece. SY

Screams crashed the shore of slumber, sonic flotsam that abruptly awakened Jesse for the fourth time in a week. He pressed his palms to his temples, audibly groaning. The screams, originating from the house behind the apartment complex he lived in, had been escalating over the last few months, but in the last week, the needle had been pushed into the red.

It’s only going to end badly, he thought.

He paused to gauge everything, the language not always clear, just the bulldozing audacity of the two voices that ripped him from his sheets. Two voices: Lisa, the wife or girlfriend (he only knew this because her husband’s or boyfriend’s bleats wrapped her name within the delicate embrace of “you fuckin’ whore, Lisa, fuckin’ twat”), and her throat wrenching cries, sounding like a rocket about to lift off; and Mike, the husband or boyfriend (only known because his name was hurled with equal ferocity by the loving wife or girlfriend, Lisa, she of the “fuckin’ whore, fuckin’ twat” designations), growling like the world’s meanest pit bull, slobbering and rabid.

Christ, this was getting ridiculous. He called the police on two of the three previous occasions this week, beaten to the punch once when police sirens derailed his dialing, much to his delight.

END_OF_DOCUMENT_TOKEN_TO_BE_REPLACED

Ever since I reviewed Etiquette & Espionage in the first of the Finishing School series, I have been waiting anxiously for the second book to release in this young adult steampunk adventure. Finally, I got my wish and decided to review Curtsies & Conspiracies  for this edition of SQ Mag.

END_OF_DOCUMENT_TOKEN_TO_BE_REPLACED

Logan Drewry begins his escape into the desolate Morland Basking Plain in a desperate bid to outrace the troops of the Grand Satrap. His foolhardy

decision may not only cost him is life, but the cause of the people he is trying to flee. Old enemies and new will attempt to take their shot at the famous warrior, but will it be the desert that finally claims victory over him? SY 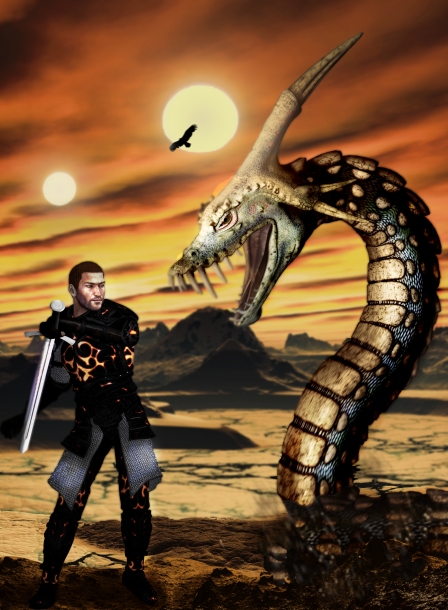