We are very happy to announce that Rhoads Brazos’ story, ‘Tread Upon The Brittle Shell‘, which appeared in our Australiana Edition, SQ Mag #14 (1 May 2014), has been selected for inclusion in the Year’s Best Horror Volume 7, edited by Ellen Datlow.

This is a great milestone for us, as well as a nod to Sophie Yorkston’s editing skills.

Well done to Rhoads, Sophie, and all the other contributors to the anthology! 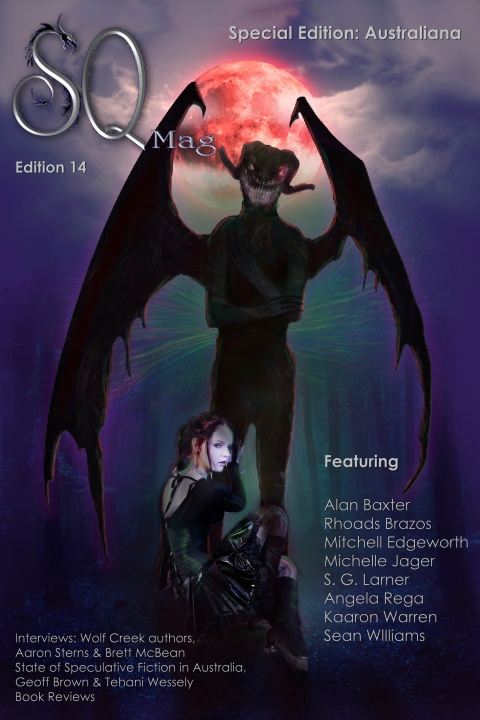 Edition 14: Notes From the Editor

When I originally envisioned this theme for this year’s edition, I was hoping to celebrate the opportunities that being a writer and publisher in Australia offered. I have to confess that I didn’t imagine the scope and breadth that this edition would take on; though I should have.

It’s an exciting time to be an Australian publisher and writer in the first major strides of the digital publishing industry. We were thrilled to take SQ Mag into an online platform, and it is so fitting that it had to be reinvented to accommodate what is our best effort to date. And that is hard to top, given the reception for our 2013 Special Edition, Women in Writing.

Now that we have time to step back and admire this edition, I am humbled by the contributions we have received. Three pre-eminent writers—Alan Baxter, Kaaron Warren and Sean Williams—are featured as our headliners, each of them with different and fantastic stories and perspectives. Alan’s story, The Darkness in Clara, is the inspiration for our cover and a beautiful story of love and family in the face of darkness of the soul. Kaaron has written an intensely atmospheric, disturbing piece, Eleanor Atkins is Dead and Her House is Boarded Up, exploring Eleanor’s strange relationship with her confined world throughout her adult life. Sean’s story, Tyranny of Distance from his Twinmaker series, is a testament to loss and the search for understanding of nonsensical existence.

END_OF_DOCUMENT_TOKEN_TO_BE_REPLACED

Tags: edition 14, notes from the editor

Edition 14: The Bush Bride of Badgery Hollow by Angela Rega

Where you see the skeletal remains of a wattle and daub cottage set against the low dry hills of Badgery Hollow, you know this is where an old colonial tried, but failed to keep, a sugar glider bush bride.

The wind whistles here; it is a desolating lament for early settlers. It sings between the branches of brittle trees, across this yellowed land. There is movement in the burnt out tree stump and inside is the remnant of her story: the sugar glider bush bride.

The changeling woman stretches out two webbed wingfolds and glides from arbor to arbor; she is a native of this Australian landscape. She is fresh like the morning dew glistening between her long eyelashes, her hair is a memory of sugar glider markings; silken and silver, except for the ebony streaks on either side that reach the tips of the hair that fall to her waist.

END_OF_DOCUMENT_TOKEN_TO_BE_REPLACED

Edition 14: The Darkness in Clara by Alan Baxter

When Michelle loses the love of her life, she struggles to understand what could have brought her to that dark place. As she starts to dig back into Clara’s past, Michelle discovers that there were secrets of her tormented adolescence that Clara kept from her.  SY

Michelle saw Clara’s feet first, absurdly suspended a metre above the ground, toes pointing to the carpet, ghostly pale and twisting in a lazy spiral. The rest of the scene burst into her mind in one electric shock a fraction of a second later; Clara’s wiry nakedness, limp arms, head tilted chaotically to one side. Her tattoos seemed faded against ashen skin. Her so familiar face grotesque and wrong, tongue swelling from her mouth like an escaping slug. And her bulging eyes, staring glassy and cold as Michelle began to scream. Light from the bedside lamp cast Clara’s shadow across the wall like a puppet play, glinted off the metal legs of the upturned chair beneath.

I bought her that belt, Michelle thought, as she stared at the worn black leather biting deep into the blue-tinged flesh of Clara’s neck, and she drew breath to scream again.

END_OF_DOCUMENT_TOKEN_TO_BE_REPLACED

Edition 14: Keep the Water Out by Mitchell Edgeworth

When the world changes shape, there’s always opportunity for those that seek it. Karrinyup Island once was a part of the Australian mainland, but the water level has caused Perth to retreat and entrepreneurial people have settled the abandoned territory in a bid for a new life. But don’t get too close; Australia has a sovereign boundary to protect, and a wall to keep the undesirable tide out. SY

Lewis was the first Australian I ever met. He came to Karrinyup Island when I was fourteen years old, sailing across the strait from Padbury on a fishing skiff and tying up at the docks at the end of Newborough Street. He wore boots and jeans and a broad round hat, shading his pale face from the sun. I couldn’t believe how white he was. I’d seen pictures of Australians before, but seeing one in the flesh was different. He fascinated me from that very first day.

None of what happened later was his fault. Not really. But when I think of that day now it makes me sick.

It was a cool morning in the dry season and the Sanmadi was chugging south at eight knots, carefully picking her way between the crumbling, weed-covered towers of what had once been called Jolimont. Flocks of seagulls went screeching and whirling from their nests twenty storeys above our heads, and a gentle breeze whipped the smell of seaweed across the deck. My brother Okitha stood at the prow with the depth sounder, calling numbers up to Dad in the wheelhouse—these waters were rarely travelled, and the wreckage in the sunken streets shifted and moved with the tides. Kadek, Dad’s Balinese dive partner, stood barefoot on the roof of the wheelhouse itself, scanning the south-east with his expensive Korean binoculars, looking for drone patrols or the red warning lights of sea mines. In my two years aboard the Sanmadi we had never come so close to Perth’s outer perimeter, and my nerves were jangling.

END_OF_DOCUMENT_TOKEN_TO_BE_REPLACED

Edition 14: Book Review: The Dagger of Dresnia by Satima Flavell

Reviewer disclaimer: I know and have worked with Satima on Specusphere for several years. I received no payment for this review beyond the e-copy of the book and although Satima and I get on well, we get on well enough for me to happily say what I really think about her work and still get away with it.

The Dagger of Dresnia, the debut fantasy novel from Satima flavell is the first book of the Talisman Trilogy—the dagger itself being one of three titular talismans, and Dresnia being one of the three divided portions of the island kingdom where the story is set, each portion to be ruled by a different brother-king.

END_OF_DOCUMENT_TOKEN_TO_BE_REPLACED

Edition 14: Eleanor Atkins is Dead and Her House is Boarded Up by Kaaron Warren

Eleanor Atkins lives in a house with the Others, and has for her entire adult life. Looking back, she starts to ask herself questions about her life that don’t have easy answers. SY

When Eleanor Atkins dreams, it is of ordinary things. Going to church and organising the woollens for the jumble sale. Sorting the tins in her cupboard and finding too much pineapple and beetroot, not enough peaches. Small and ordinary things she misses terribly. Once she was the Queen of her street, knowing all, seeing all from her kitchen at Number Two. Who is late out, late in, how much shopping, who has a visitor in the daytime, who Should Not Be There.

She’s always inside. She feels as if she’s been inside all her life, although she does know the smell of a wet dog so surely? Once? She was out.

Of course she used to go outside. Hadn’t she and her husband spent a year travelling the country in a caravan for their honeymoon? Jindabyne, Ballarat, Coober Pedy, Rockingham. She collected coasters from every pub.

And they ate at every Chinese restaurant from Ming’s Palace to Ming’s Garden, from Dragon’s Garden to Golden Dragon, honeyed prawns with their fingers.

END_OF_DOCUMENT_TOKEN_TO_BE_REPLACED

Edition 14: Tread Upon the Brittle Shell by Rhoads Brazos

Charlie sought out adventure and the glory of discovering a new cave. What she didn’t account for was what she would find. Portents suggest the site shouldn’t be disturbed, and Charlie knows it might be sacred, but will the lure of fame and adventure be too much to ignore? SY

The vehicle pressed through a cloud that thickened into terracotta, and for a moment the desert track disappeared. In the passenger’s seat, Charlie squeezed her knees with both hands, but Yileen didn’t seem too concerned. He turned his dark, weathered face to her, grinned, and refocused on the track with a languidness that jabbed at her gut.

“Have you ever—” Charlie stole a glance at the speedometer. “Gotten stranded out here?”

Yileen snorted. “Many times. Once a month?”

The Australian outback wasn’t as flat as the Nullarbor—as if anything could be—but seemed somehow even less forgiving. Charlie picked up her canteen and felt its weight.

Yileen laughed, ending with a dry cough. “Don’t be concerned. I drive this road so many times. See—boulder coming up on the right.”

There it was, melting out of the veil.

“Patch of corkwood over the ridge.”

END_OF_DOCUMENT_TOKEN_TO_BE_REPLACED

Edition 14: The Tyranny of Distance by Sean Williams

Part of the Twinmaker series, this story follows Maudlin Tom, a father working through the loss of his son by following the journey his son had planned. What he discovers in a sleepy rural town lands him in the midst of danger and destruction, but Tom cannot turn away from those that could be saved. SY

Maudlin Tom was seven kilometres out of Cowell when he learned of the crash. The Air was suddenly full of the news that some teenaged terrorist had marched into the headquarters of the global d-mat network and singlehandedly shut it down. It was all anyone could talk about, and with good reason, Tom supposed, although he himself hadn’t used d-mat for months now. Wholesale matter transmission had revolutionized transport, saved the environment and created a post-scarcity utopia unlike anything in human history. Without d-mat, the world literally ground to a halt.

“Bet you’re pleased,” a dozen or so people went out of their way to tell him. The simple sentiment was depressing on at least two levels. One, because he wasn’t pleased at all. And two, he wasn’t as popular as he had been when he’d left Sydney. Then, riding high in the public consciousness on a wave of either sympathy or notoriety—he could never tell the difference—it had seemed for a while as though people understood. And understanding was what he wanted, wasn’t it? It was hard to be sure, with his followers down to a few hundred, and of those only a dozen who were willing even to gloat.

Tom trudged on, wondering if Georgie would have been pleased. Probably, but who could be sure about that either? In the final days, he felt that he had hardly known his son at all.