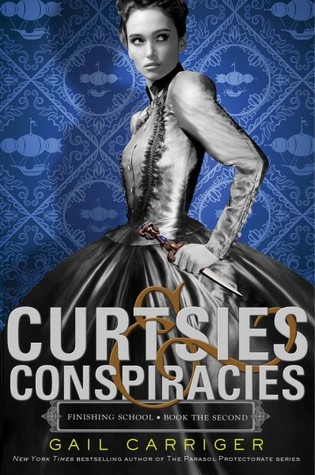 Ever since I reviewed Etiquette & Espionage in the first of the Finishing School series, I have been waiting anxiously for the second book to release in this young adult steampunk adventure. Finally, I got my wish and decided to review Curtsies & Conspiracies  for this edition of SQ Mag.

Like many middle books in an on-going series, this one didn’t quite hold the same excitement as the first. Yes, we are still riding along with Sophronia Temminnick in Madame Geraldine’s Finishing School for Ladies of Quality, a one-of-a-kind institution for Britain’s girls of social standing. It’s housed in a giant airship that normally floats high over the English moors, unbeknownst to the general public. Also unbeknownst to the public AND the headmistress Geraldine, the young ladies are being trained as intelligencers—spies of high society if you will.

Sophronia and her friends we came to love in the first book are all still active in this story, which picks up six months after she first arrived. It’s great to see them coming into their own, like timid Agatha, flighty Dimity, and mannish Sighead. There’s the adorable mechanimal dog Bumbersnoot. Even Soap is back—the charming sooty from the boiler room. The romance between him and Sophronia grows stronger in this story, which I found one of the most endearing aspects. We’re also introduced to several new characters like Lord Felix Mersey, who takes quite a shine to Sophronia and becomes one point of a mild teenage love triangle.

The plot revolves around that super-secret device I mentioned in the first book. After Sophronia’s successful interception of it in that story, seems as though the whole world is after it. The device will apparently allow for faster air travel within the aetherosphere. Several factions are determined to keep it from the others’ hands, including a vampire society and the Picklemen. Exactly why and to what ends they’ll go to get it is what Sophronia sets out to discover.

While the plot itself was a good one, the story started strong and lagged from the middle until the climax. It lacked the action and intrigue of the first. I kept waiting to see what would happen and didn’t get to edge-of-my-seat status until the last few chapters. It felt like much of it was filler to get to that point, as though this series was slated to be a set number of books and forced into that mold. It’s hard to say whether the whole story could be told in one or two books, but I’ll be curious to read the next installment to make a better assessment of that.

Gail Carriger still delivers with her signature blend of unique setting, outlandish characters, and embellished language. Despite the slower pace, I am anxious to see how it all ends. I’d recommend this book and series to all YA readers out there, especially steampunk fans.