Edition 20: Book Review: The Grace of Kings by Ken Liu 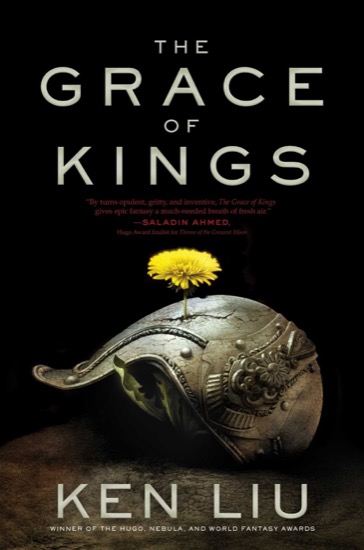 Anyone who has paid even passing attention to any of the major speculative fiction awards over the last few years (I’m talking Nebula, Locus, Hugo—before the current controversy) will know of Ken Liu and his prodigious ability to pump out a quality short story. If you’re not an award watcher, Ken’s short story Running Shoes appeared right here in Issue 16, so there’s no excuse for being unfamiliar with his work.

Grace of Kings is Ken’s debut novel and given he’s gone for an archetypal Big Fat Fantasy, and given that it’s the first of a trilogy, there was always going to be a lot of expectation and pressure around this book. I’m happy to say, the story defuses this tension and acquits itself on many levels, with a couple of caveats that I’ll address shortly.

The story is set on the archipelago of Dara, a land recently united from a series of fractured, warring states into a single empire under the Xana people. There are many parallels between Dara and dynastic China that even I, with the majority of my Chinese historic knowledge drawn from badly lipped-synched kung fu movies, managed to pick up on. A little research after the fact suggest to me that there are enough references, hat-tips and similarities to historic China to satisfy any fan of the period.

Although there is a minor phone book’s worth of characters listed in the dramatis personae at the start of the book, with many characters featuring in their own chapter or sub-plot, the book is set around two main protagonists. The first is Kuni Garu, a rogue, cast out by his family in the vain hope he will make something of himself, whose sole apparent direction in life is to take the most interesting path regardless of consequences. The second is Mata Zyndu, last son of a noble house slaughtered by the new emperor. Zyndu is a giant of a man who sees the world in black and white, has the required heroic mark of greatness (in this case, double pupils in each eye) and is determined to topple the empire and return the world to what he considers an ideal social order.

Together, and separately (and, without posting spoilers, together and separately again several times over), the two work to break the regime and remake Dara into their own version of an ideal world.

One of the book’s great strengths is that it does not adhere to the traditional Big Fat Fantasy tropes. Sure there are only so many character variations out there and you could no doubt relate any character in the story to another you’ve seen somewhere, but this is not a Grizzled Rogue, Uptight Shiny Knight, Ethereal Elf (token female), Stalwart Dwarf and Innocent Bystander going to fetch the artefact and topple the evil lord in a facsimile of medieval-Europe. While there are many parallels with Chinese history, they may not be something that Western fantasy readers will be used to and that Ken Liu manages to successfully portray this world to a wider audience speaks volumes.

The flow and detail may also take some getting used to for some. Many huge battles are resolved in a matter of paragraphs; less space than is used for a conversation around the virtues and uses of a dandelion. The biggest battles of all, involving huge air, sea, land and divine engagements are shorter than some meal descriptions I’ve read in other epic fantasy novels.

One of the recurring themes throughout the story is that there is no absolute right or wrong. No traditions are rock solid, no one is worthless or above reproach. Even the gods themselves are left guessing on occasion. There are stark reminders—to an occasional point that either annoyed or depressed me—that power corrupts and that men are largely at the mercy of their desires and instincts.

The book takes place over the course of decades and follows the building and toppling of an empire and what comes after. However it always retained the personal impact, without dissolving into a giant chess game. It is conveniently broken into 50+ chapters—one indication of the many interweaving parts of the story—so it can be digested in brief sittings if required. While I found myself getting a few characters and lingo confused to begin with, understanding their motivations endeared me even to the unlikable ones and left me wanting to tease out some of the many sub-stories further. The presence of cast lists, a map, a glossary and some other useful resources helped as well.

While there were some occasionally dubious engineering explanations and some of the pseudo-steampunk elements (yes, there are airships and even submarines), there is very little not to like here. Approximately a third of the way through, and again around halfway through, I found myself thinking everything was coming together and winding up, only to have a new direction blossom out. Keeping any narrative alive for 600+ pages without a reader’s interest flagging at any point is an astonishing feat. The Grace of Kings is a page turner, and the fact it is only the first in a trilogy pleases me greatly. Although I can’t see how it wouldn’t, I hope The Dandelion Dynasty trilogy does great things.