The nameless groundskeeper brings sacrifice after sacrifice to his queens to satisfy his bargain. His offerings may be enough to take him home again, but is it enough for him? SY

The ground scraped his nose as he bowed low before his majesties. As he straightened he pulled the rough cloth off the prize with a flourish.

They gasped. The sound shivered and bounced off the grey slate walls.

“What is this, sisters?” The multilayered voice buzzed with harmonics as each mouth spoke in unison.

The man waited. Their husbands—mute fools that they were, white and black and brown with jutting erections—clapped and capered. He averted his eyes from their folly. Instead he observed the offering.

When he’d found it upon the slopes of the windiest mountain, it let itself be taken. The long neck bowed, it kept its wings folded by its sides. It could have flown away.

“Oh sisters, I know! Mercy is white, mercy is wise!”

The husbands danced, bells chiming on their ankles.

“This is a marvellous trophy, Groundskeeper,” they said. He clenched his jaw at the mocking title they had given him when they took his name. “Marvellous indeed.”

When they were happy they were multitude: their perfect faces dark and pale, painted and bare. At that moment he could not count the queens—so plentiful they filled the throne room. The husbands inhabited the shadows.

As one the queens sighed and flexed and became white eagles, their talons sharp and curved. The Mercy creature stretched its wings and took to the air, soaring high above his head. The queens flew, and for a moment the throne room was snowing.

Then the Mercy creature shrieked, and blood rained down.

Inside the mountain there was warmth. He crept toward the flickering light, sack hanging empty across his back, bow in hand, arrow held ready. When he reached the cavern in the mountain’s heart the beast welcomed him with open arms. He pulled the sack over its head and carried it down the mountain.

Again he bowed low and revealed his prize. Again they gasped.

“What is this, sisters?”

The voices caressed him. A torrent of bitterness surged through him, underscored by lust that settled, throbbing, in his loins. He tensed his shoulders against the ache.

“Love is red and love is blind,” they sang.

The creature’s red scales glowed and its eyes were milky orbs. Smoke drifted from its nostrils, but he could see how it adored them all.

The husbands twirled. He stared at his feet until his ears rang with the clattering of hooves. Curious, he glanced up. The queens were a vast herd of red unicorns, their horns gleaming with fire.

The Love creature drew in a breath, but the unicorns gored it before it could exhale. With a smoky sigh it sank to the floor as its heart’s blood darkened the stone.

In the valley below the mountain a shadowy jungle draped tendrils of green over his broad shoulders. The bow and arrow were useless here. As he stumbled through the thick undergrowth he brandished a machete instead.

Ahead something purred. He could barely see, but it pressed itself against his side, let him stroke its sinuous body as it sauntered past.

He hesitated. It had all been too easy.

If a man invokes us, they’d said, he must be prepared to hunt for us. A life for a life. Three lives: yours, your wife’s, your son’s. Choose wisely, Groundskeeper.

His throat swelled with nausea as he recalled his wife, come to childbed too soon, sprawled in a pool of her own blood with his son a motionless doll between her legs. A sharper feeling pricked his skin.

Three lives. He stalked the black creature and when he neared it once more it lay down. A snort came from the undergrowth behind him. As he turned he saw a wrinkled dirty monster with stained tusks and baleful eyes. It pawed the ground, bellowed, and charged.

Too late he raised his machete. Pain speared his thigh and he thudded to the ground, wrenching his shoulder. It trampled him as he flailed with the blade. A grunt when his blow connected, and it backed off. Through this the dark soft creature gazed with sleepy calm. The man struggled to his feet, waving the weapon at the fearsome beast. Its wild eyes narrowed. As it readied itself for another charge he dropped the sack over the placid one, cradled it in his arms and fled, limping.

For a third time he bowed low, pausing with his hand on the cloth, made serene by the rich earthy scent that wafted from the sack. A purr rumbled through the room. The queens’ faces hovered above him, eyes wide and sparkling, lips parted, tongues caught between white teeth. The scent of their womanhood overpowered the other, destroyed his serenity.

“Show us, Groundskeeper. You shall have your reward,” they urged.

He braced himself and revealed the last prize.

“Oh,” they said, a soft puff of air against his forehead. “Compassion is dark, deep as a clear night sky.”

He stared at the midnight creature, soft and sleek and content. Its yellow eyes blinked slowly as it gazed back.

The husbands chased their tails. The queens shook themselves and in a blink they were giant black bears. The Compassion creature arched its back and hissed, but it disappeared under the relentless ursine mass.

The man turned to leave, still limping from his wounds.

“Halt, Groundskeeper,” the voices growled. When he looked back, the bears were gone and the queens laughed.

“We promised you,” they trilled, “a reward for the three greatest treasures in our land! Three, we said. Three, you delivered. What reward do you seek? Ask anything, anything is yours.”

The queens shifted and flickered, growing and shrinking, fading and solidifying. Vertigo gripped him and he swayed. That was not how he remembered it. Reward?

“My Majesties,” he said when he found his voice. They smiled at each other, whispering words he could not hear. “The only reward I seek is what I asked for the night I arrived here. To return to my family, and they be well.”

He saw the glint in their eyes, but recalled his newborn son’s wrinkled grey face.

“All men want sons,” he said. The words meant little, but they were the ones he’d held onto.

In happiness they were multitude, but in anger they were few. The queens faded until there was only one, her flawless face pale marble.

“Leave, then,” she hissed. “Slink back to your family.”

The slate grey stones of the throne room dissolved, and his vision blurred, until it refocused on his rundown hut, light shining from the lone window. He swallowed, strode forth and knocked on the door.

It opened. His wife stood before him, her mouth gaping. He observed her pockmarked brown skin, the yellowed whites of her widened eyes. Her waist had thickened and a front tooth was missing.

The man tried to smile.

She flinched. “Husband,” she said. “I thought you were gone. Here, see your son. He lives, though born early.”

He followed her into the hut, oddly empty inside his heart. She handed him a baby whose face was brown, not grey, and bigger than he remembered.

She looked away. “Three months. It’s been hard.” She stood, wiping her hands on her skirts. “Here, I’ll get you some supper.”

Her voice irritated him, with its singsong cadence. The infant screwed up his face and started to cry. His wife clucked and took the baby, sat down. She uncovered a breast. He watched as the baby attached to the dark nipple that had once been his to enjoy. The frown deepened.

“In a moment,” she began, but when she looked up her words trailed off. She took the baby off her breast and put it on a mat by the fire, then busied herself.

He leaned back and put his feet up. The infant hiccupped, and then cried. His wife glanced to the baby and back at him. The man scowled. She stirred the pot and looked away.

The cries grew louder, obnoxious. They narrowed and stretched until a wailing shriek pierced his ears. A bubble swelled inside his chest; it popped, he stood, and in three strides he was at the mat.

Hands clenched into fists, he imagined lifting the baby and hurling it into the fire. The flames crackled and begged. The muscles in his back were taut as he fought the urge. At the stove his wife watched, unable to speak. Her mouth opened and closed. She was nothing, compared to his queens.

He turned his back and walked to the door.

With a hand on the doorframe, he shook his head. “This is not my life.”

She said nothing, just let out a gentle sigh, perhaps of relief. Red heat flooded his veins and he left before he succumbed to the burning rage.

The chicken squawked as he wrung its neck and uttered the words. A blink, and when his eyelids fluttered open the grey walls of the throne room surrounded him once more.

A lone queen stood before him, dark and silent.

“Behold,” she said in monotone. “He returns.”

“Forgive me,” the Groundskeeper said. “I was wrong to leave.” His body smouldered with need.

Two more queens appeared. In three-part harmony they spoke. “You slaughtered two chickens. One to beg for the lives of your wife and son, and now a second. What will you beg for?”

He fell to his knees. “I was desperate to save them. But all is different.”

“You were guilty,” they said. “Whose fault is it that your wife came to childbed early?”

His face burned. “I beat her.”

“And if the babe had been a girl?”

He confronted the beast in the jungle once more. This time it was inside him.

The queens pointed, and he saw stuffed and mounted on the wall, three trophies.

“Do you know what they are, Groundskeeper? Do you understand?”

He stared at them. “My mercy, my love, and my compassion.”

“You could have redeemed yourself. You fled from your anger instead.” They laughed, and towered above him, faces stern.

“I did as you asked,” he said, his voice laced with fear. “Don’t send me back.” He needed their faces, their scent. Their perfection. The husbands were still, watching.

“We like trophies, Groundskeeper. Not chickens. What do you offer?”

He searched inside for some happy feeling not tied to his queens. There was nothing. “Me.”

Smiles bloomed on a multitude of faces. “Oh, how wonderful,” they sang. The husbands cavorted.

Weight dragged on his ankles. He looked and saw chains hung with bells. His body grew dim and insubstantial. He glanced up at the queens, saw the glint in their eyes.

He stood, his movements spasmodic, and joined the rest of the husbands. The heavy chains pinched his shadowy form, heart turned to granite in his chest, and his eyes became dry and glassy.

Through the jangling of his bells the lust remained.

And he danced and clapped and adored his queens. 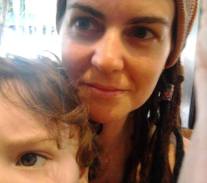 S. G. Larner is a denizen of Brisbane, Australia, where she complains about the heat, wrangles three children, and explores the dark underbelly of the world in her writing. Her work has appeared in Aurealis and Phantazein, among others, and has been selected for Year’s Best anthologies. She’s currently studying a Masters of Information Science. You can find her at http://foregoreality.wordpress.com and on twitter @StaceySarasvati.

S. G. Larner has been published previously in Edition 14 (Chasing the Storm)