Edition 16: Book Review: The Book of Life by Deborah Harkness 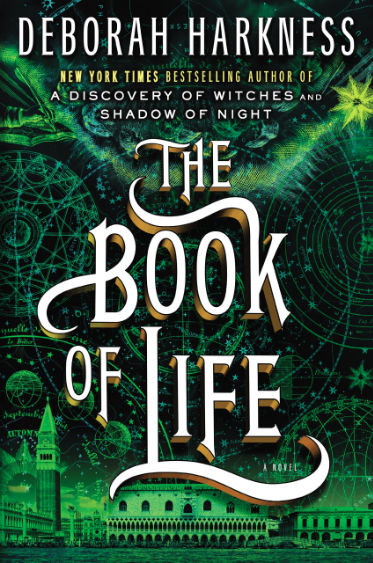 After a nearly two-year wait, fans of Deborah Harkness’s All Souls Trilogy will be thrilled to know that the third book has finally arrived. You may remember my reviews of the first (A Discovery of Witches) and second book (Shadow of Night) in 2012. Having enjoyed the previous stories so much, I had very little trouble remembering the plot details that were left unfinished. This final installment wraps all the loose threads into a mostly-satisfying ending.

The Book of Life, above all else, reminds us that forbidden love is the guiding force of this trilogy. When the story opens, we are taken right back to where Shadow of Night left off, in the driveway of Sept-Tours, the ancestral estate of vampire Matthew Clairmont’s family. He and his new wife, witch Diana Bishop, have just returned to the present time from a long sojourn in 1591. They’ve survived attacks from enemies in both present and past, bent on destroying their uncommon union. During those trials, something even more miraculous and seemingly impossible has happened. Diana is pregnant.

Yet, their joy is quickly dashed when they get some terrible news there in that driveway—Diana’s beloved aunt Emily has died while they were gone. Worse yet, it appears she was killed by another witch, just to get information that could tear Diana and Matthew apart for good. The story quickly progresses from here, because now with Diana’s pregnancy, it’s not just she and Matthew who are in danger. They know the only way to gain control of the situation and to keep the powerful Congregation from destroying their future is to find The Book of Life (once known as Ashmole 782) before it falls into the wrong hands. It may hold secrets to their origins, and whoever owns it could possess knowledge and power that would stop their enemies in their tracks.

Of course, the mysterious tome is not so easy to find as when Diana first stumbled upon it in the Bodleian Library. The book seems to have been misplaced. They know three pages are missing. They have one, but must locate two more in order to revive The Book of Life once they find it. Along with this search, they must deal with the constant threats of fragile vampire politics, dark secrets that reemerge as deadly threats, and a deadline (the babies will be here in a few short months). The suspense rises with every page until you’re holding your breath and praying that this star-crossed pair will finally have a happy ending.

In keeping with the title, Ms. Harkness has an uncanny ability to bring the characters and setting to life on the page. Vivid descriptions open the door to your imagination and let you step right into the story. Meticulous research adds a solid layer of authenticity to the plot. From historical facts, to language, alchemy, and the intricate details surrounding Diana’s magic abilities, it all feels plausible in the midst of this dramatic fairy tale.

Once again however, like the previous books, those details often overflowed and bogged down the story. I skimmed over some lengthy descriptions of magic use and mundane activities to get to the next phase of action. Like I’ve noticed with the last series I read, this one seemed to suffer from the “let’s stretch this out into a trilogy” disease. A lot of information could have been cut to keep the action flowing better, especially in the last third of the book.

Unfortunately, I think the ending suffered because of this. So much tension was built up early on, I expected a huge final conflict. But what we got was a rather quick, anticlimactic resolution. Much as I hate to say it, the last few chapters seemed more focused on making a statement about marriage equality than wowing the audience with an unforgettable ending. With all the fillers, stakes weren’t high enough and opportunities for gasp-inducing twists were missed. The last few pages were more mundane than exciting, as though the author didn’t want to say goodbye to Diana and Matthew.

Really, I can’t blame her. Despite the lulls, the whole trilogy was very well done and the characters fleshed out so much they felt real. You’ll smile at their joys and cry at their sorrows. You’ll even laugh at some of the quotes like this one from Matthew: “I have never, nor will I ever sparkle.” You’ll be thoroughly sucked into a paranormal tale of forbidden love, but a love so strong and palpable that even a vampire fiction skeptic like me can appreciate it. I’d recommend this book (and trilogy) to any adult paranormal romance fans.