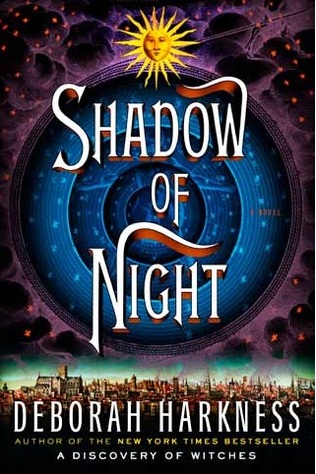 Sequels are tricky things. Sometimes they lack the novelty and excitement of the first book in a series, particularly when the book is the second in a trilogy. Often, those books serve more as a segue into the finale than as a stand-alone story in themselves. I’m happy to report, however, that Shadow of Night, the second book in Deborah Harkness’s All Souls Trilogy, performed as well as any solo book of its genre.

The epic love story and creature conflict begun in Discovery of Witches continues in this book, opening with the witch Diana using her newly-discovered timewalking ability. She and her husband, the vampire Matthew, step back in time to 1590 England. I did wonder why they would choose a time period when witch-hunting ran rampant throughout Europe. This decision and a few others might give the impression of an overly-complicated and contrived plot, but if you’re reading a paranormal romance like this trilogy, you should already have an open mind, right?

To give Diana and Matthew the benefit of the doubt, they honestly think time travel is the best course of action to find the answers they seek. Shady members of “The Congregation” have already tried to kill Diana in their quest to uncover the mysterious “Ashmole 782”, a book Diana stumbled upon in the very beginning of the first installment. Diana and Matthew believe they can track down the book in the past, as well as find other witches who will help Diana come to terms with and develop her powers, which had been suppressed since childhood. They also believe stepping back in time will keep them (and their forbidden relationship) safe from The Congregation, at least temporarily.

As soon as the two of them arrive in the past, Elizabethan Era fans like me are greeted with characters such as Christopher Marlowe and Sir Walter Raleigh. From here, the deliciousness of historical figures blending seamlessly into the lives of the fictional characters is this book’s greatest strength.

Ms. Harkness takes some liberties with these real historical figures, making Marlowe and others into some of the three non-human creatures. Marlowe is portrayed as a daemon, which accounts for his troubled psyche and creative genius. Even with the fictional spins, I think Ms. Harkness must have been channeling Marlowe and the others from that period, as I could have sworn I had stepped back in time with Diana and Matthew. I’m not a historian, but from my perspective, she nailed the speech, setting, clothing, and everything that makes a historical novel come alive for a reader. Tudor aficionados will enjoy some scenes with Queen Lizzie herself!

Romance fans will be happy that Diana and Matthew’s relationship, though strong by the end of the first book, is fully cemented in this story, leaving readers with no doubt that these two were meant for each other. True to the emerging Shakespearean era of the book’s setting, their love story takes on a Romeo & Juliet atmosphere. We desperately want them to have their happily ever after, but we feel the constant weight of The Congregation’s mandate about keeping creatures apart. These two are put through the wringer as they assume their temporary roles in Elizabethan England. Their trials and triumphs tugged so hard on my heartstrings that I will never be able to forget their story.

The only downsides of this book for me were the details. I found myself skimming through long descriptions of clothing and other mundane activities to get to the action and dialogue. I did feel that the story moved at a much better pace than the first, however, not lingering for too long on the “toothbrush moments”, and instead gave us more time with wonderfully colorful characters.

Despite the slow bits, I hope you’ll give this series a try, especially if you enjoy paranormal romance that is far from childish and cliché. I’m not certain when the third and final installment will be available, but you can be sure I’ll be snatching it up as soon as it appears.