← Edition 3: Ring Finger by John Claude Smith
Edition 3: The Raptor and the Lion by Larry Ivkovich → 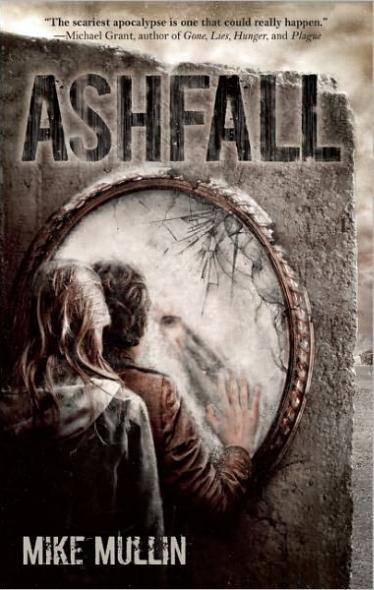 Books about boy wizards will be compared to Harry Potter. Likewise will a teen dystopian novel be compared to The Hunger Games. Just like Katniss, young Alex in Mike Mullin’s Ashfall is thrown into an unspeakable life and death situation.

But that’s where the similarity ends.

It’s not just 24 unfortunate teens who suffer the brunt of the story’s conflict. The entire US must deal with the effects of a super-volcanic eruption. Though the disaster occurred near Yellowstone, hundreds of miles from Alex’s home in Iowa, within a few hours, life for him and every American was turned upside down. As gray ash covered everything familiar, vile truths of man’s primal nature were unearthed. This kept me turning the pages.

The story begins with Alex behaving like a typical rebellious teen. His mom, dad, and sister are heading out on a trip to Illinois to visit his uncle. Alex refuses to go, declaring that his uncle’s farm is boring and he’s old enough to spend a weekend alone for once. Mom and Dad finally agree, but only a few short hours after they hit the road without Alex, something (which we later learn is a huge chunk of volcanic rubble) crashes into the house and almost kills him. He seeks refuge with some neighbors, and that’s when all hell (pardon the cliché) breaks loose.

From there, we experience Alex’s struggle to locate his family and his perilous journey firsthand. Cars, electricity, water, phones, and easy-to-get food are a thing of the past. He has no choice but to set out on foot, though he does manage to find a pair of skis that help him slide across the ash layer. We feel every wound, and the chafing ash in his lungs and skin. We are just as afraid and uncertain as he is along the way, especially when hunger-crazed people try to kill him every five pages or so.

Through every harrowing scene, however, we still manage to meet the real Alex—a teenage boy who isn’t experienced at much of anything. We see him come to terms with using his taekwondo skills for survival instead of competition. We smile at his attempts to forge a relationship with Darla, a girl who saved him from certain death when he stumbled upon her farm. At one point, I had to laugh when Alex admitted to us that finding condoms suddenly became more important than finding food.

The book’s biggest strengths are the writing, which is as real and gritty as the never-ending ash, and its plot. Unlike The Hunger Games, whose plot was pretty unlikely to occur, there’s an incredible plausibility factor in Ashfall. Minute by minute, paranoia sets in, and I worried that we could experience a super volcano in our lifetime. Thank goodness Mr. Mullin set my mind at ease with a nice section about his volcanic research at the end of the book!

With all the book’s strengths, only a few things gave me pause. For one, a few plot devices seemed too convenient. Let’s take Alex’s trek on foot to find his parents: practically every farmhouse he passed contained homeowners who weren’t shy about pointing their shotguns at him. It seemed as though everyone had a gun, except for Alex, and Darla and her mother, who were the three people who could have benefited MOST from a gun. I found it a bit of a stretch that self-sufficient Darla, who had ran their family farm for three years after her father’s death, wouldn’t be toting a gun.

One other thing actually made me angry, and it involved a turn of events near the end of the book. Without giving any spoilers, I’ll just say that I hated the portrayal of our military at a refugee camp. They were depicted as heartless and inhumane. I couldn’t imagine a whole unit of our servicemen behaving like that, especially only six weeks after the eruption. I’ve seen them in action during other natural disasters—they are resourceful and self-sacrificing. I could believe that the camp wouldn’t be a Hilton, and that food would be rationed, but I had a hard time believing that they would have treated Alex and all the others like they did.

Despite that turn of events, I found Ashfall to be extremely engaging and a real page-turner. Being the romance-a-holic that I am, I enjoyed seeing Alex and Darla’s relationship blossom (albeit not smoothly) over the course of the book. The relationship itself seemed symbolic of how life has changed for everyone. I’ll end with a couple of my favorite lines to illustrate:

We must have been quite a sight. Two gray-white ghosts, sailing down the rest of the hill on one pair of skis, cackling maniacally and trailing a plume of ash in our wake . ~ Ashfall, Chapter 24

The Grim Reaper had visited me again, had even poked me with his scythe, but Darla had dragged me by the hair from his dark kingdom . ~Ashfall, Chapter 33

← Edition 3: Ring Finger by John Claude Smith
Edition 3: The Raptor and the Lion by Larry Ivkovich →