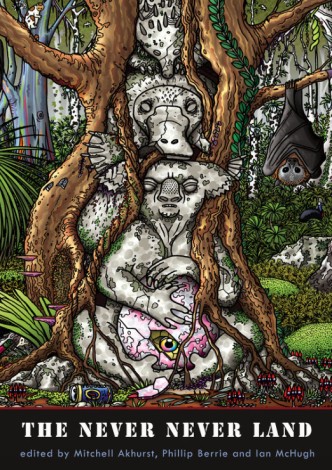 Disclaimer: I am friends with many of the writers from this anthology on social media, as our community is not excessively large. However, I bought this anthology and have no obligations for reviewing.

Canberra boasts one of the most cohesive writing communities in Australia, and the Canberra Speculative Fiction Guild (CSFG) boasts some illustrious members. While also incorporating authors from other cities, The Never Never Land anthology boasts some of this country’s best authors, with stories that have a recognisable Australia in them.

The stories fall largely in the fantasy aspect of genre, but not entirely. Akhurst, Berrie and McHugh must have had quite the (fun) job of selecting all of these and working out their placement. I thought the miniature Australian map as a section break was delightful.

I had a delightful experience reading Leife Shallcross’ Adventure Socks, where the piano instrumental I was listening to on Spotify expanded the emotional landscape of her story of two older folk in a nursing home, without prospects of further life adventures (cue the soft, melancholic notes). There’s some subtle social commentary on Australian politics from Thoraiya Dyer in Tirari, Desert Saturday as well.

Shauna O’Meara—who is also the artist behind the excellent cover—stole me away into the wilderness with her surreal To Look Upon a Dream Tiger. Against the Current by Dan Baker, Helen Stubbs’ Hard and She’ll Be Right by Donna Maree Hanson also dallied with the surreal, leaving you with a not-unpleasant sensation like the after effects of dreaming.

Cat Sparks’ Dragon Girl short seemed to me to end too soon, but vivacity of teen emotions and dry desert landscapes of the interior were mesmerising. I’ve had the pleasure of beta reading Jodi Cleghorn’s The Meek Shall Inherit the Earth and the bleak but hopeful landscape of the world of one barely-adult young woman makes for compelling storytelling.

The only detraction for me was that in my ebook version, perplexingly in a couple of places, the second ‘t’ was missing from a word. And not every word. Ah, technology.

There’s so many shorts worthy of a mention in this collection; I can’t think of any that weren’t entertaining. To me, that’s a resounding recommendation for anyone who enjoys their speculative fiction in bite-sized chunks. And the Australian flavouring is just the fruit on top of the pav – delightful!

Sophie is a scientist, aspiring writer, sci-fi and fantasy nerd. She is an editor with IFWG Publishing and has been Editor In Chief of SQ Mag and SQ Magazine, the previous incarnation. She also contributes book and film reviews. She now lives in Melbourne. You can find her in a few different places: @Smoph on Twitter, Sophie Yorkston – writer on Facebook, and at her blogs: Smoph’s Musings and Smoph Writes.