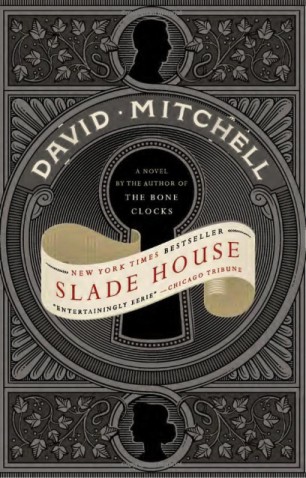 Every October, I try to find a good spooky read that will keep me looking over my shoulder while I’m munching on too much Halloween candy. This time, I gathered up a list of recommended reads and randomly chose one: Slade House by David Mitchell. Though I found the premise to be intriguing, sadly it didn’t give me any goosebumps, nor did it keep me flipping the pages, anxious to read more.

The story begins in 1979 London, where a teenage boy, Nathan, is walking with his mum to find a so-called “Slade House” for an appointment she has there with an acclaimed pianist. It turns out to be an exclusive residence hidden down a dark alley that is only accessible through a short, iron door. This door inexplicably opens up to a spacious property and house which defies physics, in that it seems to take up more space than the city block on which it is built. While his mom is busy with her piano practice, Nathan meets a boy his age (Jonah) who lives there and hangs out with him. While they converse and move around the property, things get weird. Nathan starts seeing things and thinks he’s hallucinating because of the valium and other prescription drugs he’s been sneaking. But, it’s no hallucination – he winds up in the attic of Slade House, paralyzed, and someone is hungry for his soul.

The story is divided into five sections, each jumping nine years ahead. Each features hapless individuals who finds themselves (and their demise) in Slade House for one reason or another. What I found most compelling were the unique characters represented in each section. They all had some serious personal hang-ups, and Slade House at first seemed to provide them with just what they needed. Of course, the opposite happened, which portrayed the old adage, ‘Be careful what you wish for,’ quite brilliantly.

While Slade House is categorized as a literary horror, it sits more firmly on the literary side. Mr. Mitchell certainly has a talent for description, for character voice, often breaks the “rules” and does it well, much to this writer’s delight. However, as much as I appreciated the language (a solid 10 out of 10 in that aspect), it often grew so florid as to overshadow the plot. To quote a line from a scene in Family Guy, the language in Slade House “insists upon itself.” Yes, Mr. Mitchell is a tremendously talented writer. However, to make a compelling story (especially with horror), the reader must be kept engaged in the action. In Slade House, the author went way over the top in showing off his literary skills. Had he dialed it down a notch or two, it could have been a much more page-turning read. It certainly is representative of the literary genre, though, and is a worthy lesson in descriptive writing for aspiring writers.

If you’re looking for spine-chilling horror, you’ll probably be disappointed in Slade House. If you’re a fan of literary novels, however, this one should be on your bookshelf.

Mysti Parker is a wife, mother, and shameless chocoholic. While her first love is romance, including the Tallenmere fantasy romance series and an award-winning historical with EsKape Press, she enjoys writing flash fiction (the weirder the better) and children’s stories. She resides in Buckner, KY with her husband, three children and too many pets.