Philip and Ellie have not been pre-approved for their pregnancy. Les Zigomanis brings us a world where the select few are worthy of parenthood. SY

Philip felt Ellie’s grip tighten around his hand. Opposite them, almost lost behind the enormity of his comma-shaped desk, sat Arturo Maldonado, a small, balding man in an immaculately-pressed pastel grey suit.

‘I must admit,’ Maldonado said, ‘we here at the Directory are largely unimpressed when couples participate in unsanctioned conceptions. It speaks to us of a certain…irresponsibility.’

‘Doesn’t it mean something that we’ve come forward?’ Ellie asked.

‘That depends upon your motivations,’ Maldonado said.

‘Us conceiving was-was…an accident.’ Philip bowed his head. The whole office—with its white carpet, white walls, and glass furnishings—was pristine. ‘But we’ve taken—’ He gulped, and forced the tremor from his voice, ‘—we’ve taken responsibility. We didn’t go underground, didn’t try and have an unlicensed baby.’

‘Mr Richards,’ Maldonado said, brow furrowing so deep it caused a series of ravines across his balding scalp, ‘responsibility begins in the home. It is the responsibility of couples to practice birth control, to show us at the Directory that they can be worthwhile contributors to society by observing the rules and regulations of the State. Now those laws apply to us all. However, you do fulfill most of the prerequisites required to apply for purity—simply to apply, mind you.’

Maldonado reached for his Quire. It came alive at his touch and displayed a file on its smooth glass surface. Philip saw his and Ellie’s names bolded in the text, diagrams, and even pictures of him and Ellie—was that a shot from their Caribbean honeymoon, that one time they’d dared to have sex in the water?

‘Married thirty months,’ Maldonado said as he scanned the Quire, ‘both employed, no felonies. I also see you’d submitted an application prior to discovering this unsanctioned conception.’

‘Yes,’ Philip said. ‘We were still waiting for that to be heard when—when this happened.’

‘Yes, of course.’ Maldonado scrolled through the file, his thinly penciled brows arching with cartoonish menace. ‘I see you’re committed to a long-term mortgage of your home.’

‘Isn’t everybody?’ Philip asked, and then laughed nervously.

‘What’s more,’ Maldonado went on, ‘you’re each employed in positions where the capacity for promotion is low.’

‘Does that matter?’ Ellie asked.

‘A child is a lifelong commitment, Mrs Richards. We have to be certain you will always be able to provide for him or her, that he or she will never want for anything.’

Maldonado swiveled the Quire around to show them a spreadsheet of figures. Ellie leaned forward to examine them, but Philip didn’t bother. Whenever money was highlighted in meetings, it was never good.

‘Your projected earnings over the next twenty-five years,’ Maldonado said, ‘minus repayments for your home, annual fees such as bills and various insurances; and the cost of raising a child in today’s society compounded by inflation. As you can see, you have a very narrow margin for error. Also, this projection does not facilitate for emergencies—such as a hospital stay, for instance. Something like that could leave you indebted the rest of your lives.’

‘We can’t base our lives on what might be,’ Ellie said.

‘But that’s what life is,’ Maldonado said, abruptly swiveling the Quire back, as if determining they were unworthy of its examination. ‘What might be.’

‘You’re basing everything on financial motivations,’ Ellie said. ‘Raising a child isn’t just about money. My family was poor, I grew up fine.’

Maldonado’s fingers danced across the Quire. The file opened into a new page. Philip could see reversed through the glass a picture of Ellie, just sixteen, sullen and defiant, hair streaked with pink—a mug shot.

‘I was sixteen,’ Ellie said with no hint of embarrassment, ‘a kid. That’s life. You grow up, you do stupid things.’

‘I never had any juvenile convictions.’

‘Neither did your husband.’

Ellie straightened in her chair. Philip rested a hand on her back.

‘I agree money isn’t everything, Mrs Richards,’ Maldonado said, ‘but it is something. You need to be able to provide for your child so that he or she is constantly entertained and not led astray by more subversive influences.’

‘Subversive influences?’ Ellie said. ‘What I did was a kid just being stupid. I wasn’t trying to bring down the State.’

‘Nevertheless, it is a step in the wrong direction, and a journey of a thousand miles begins with a single step.’

‘Mr Richards,’ Maldonado said, ‘it’s my job to be certain, to be unequivocally certain, that I only grant purity to couples I believe are capable of nurturing a child into becoming another worthwhile contributor to society.’

Philip gritted his teeth. That had been the second time Maldonado had used that phrase: worthwhile contributor to society. It was his fallback, the infallible argument.

‘Your work-ups are good,’ Maldonado said. ‘Neither of you suffer from any diseases or conditions that can threaten a life in its prime, nor is there any record of it in your lineage. In fact, we’re very impressed with the longevity of many of your forebears. That’s encouraging. Very encouraging! Your education is also good, both of you completing secondary education certificates with above average grades. That’s important to us here at the Directory. We want to produce thinkers, not stinkers.’

‘If I may ask,’ Maldonado said, ‘considering your education, why didn’t either of you pursue more challenging vocations?’

‘You take what you can get, Mr Maldonado,’ Ellie said.

‘And that’s the crux of our problem. Ironically, if you were lesser educated, if your IQ results had produced lesser scores, we’d find your respective occupations befitting.’

‘Are you saying we’re too smart for our jobs?’ Ellie asked.

‘People require stimulating environments in order to feel challenged and contented,’ Maldonado told her. ‘We speculate you’re in positions where you’ll stagnate and grow dissatisfied. This could lead to a negative schism in the home, and the innocent victim in circumstances such as this is always the poor child.’

‘We could get new jobs,’ Ellie said.

‘You could. But, right now, we’re dealing with what is. And you certainly wouldn’t be getting a new job as you carry this child to term, which puts the onus on your husband. Do you have any prospects, Mr Richards?’

‘Unfortunately, it’s difficult in this market.’ Maldonado shook his head. ‘I’m sorry, Mr and Mrs Richards, but I cannot in good conscience—at this time—grant your application for purity.’

Maldonado’s fingers danced across the Quire. The file disappeared, leaving only a transparent sheet of glass. He put it down and smiled.

The office door slid open and a troupe of figures in pastel grey surgical gowns and masks entered. Philip jumped to his feet but, immediately, they seized his arms and dragged him, flailing and sobbing, to the floor. A syringe flashed and was plunged into his neck. Philip’s muscles slackened, and he lost all sense of his body.

Others struggled with Ellie and thrust her up against the wall. One lifted her blouse and exposed her belly. Ellie spat at them and cursed them, thrashing like she was drowning. A syringe was thrust into her neck. She fell limp. The figures caught her and eased her down, her teary eyes level with Philip’s as her blouse was lifted again, and a laser scalpel was brought to her stomach.

Maldonado came around his desk to address them. ‘Relax, Mr Richards, Mrs Richards,’ he said. ‘Our techniques are near-instantaneous and relatively painless. Best of all, there’s a ninety-six per cent chance of no residual damage, so you will be able to try again one day—given the approval of purity, of course.’

And as the scalpel dipped into Ellie’s belly, Philip found the will to scream. 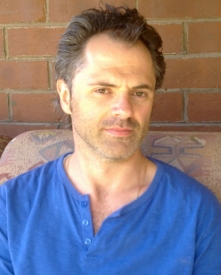 Les Zig is a Melbourne-based author who’s had an array of short stories and articles published in various print and digital journals. He’s had several unpublished books cited for awards; three screenplays optioned (with one, ‘Racine’ – a low budget psychological thriller – in preproduction with House of 4 Films), and his screenplay, ‘Punishment’, was shortlisted for the 2015 John Hinde Award for Science Fiction. He blogs at www.leszig.com on various things, from neurosis to movies to writing, and about writing, editing, and publishing on www.busybird.com.au. You can find him on Twitter as @LesZig.