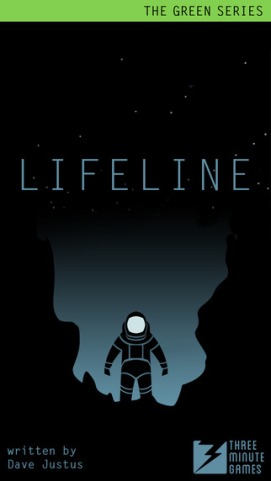 Symbiosis, as defined by a quick Google search, is “interaction between two different organisms living in close physical association, typically to the advantage of both.” This could be between two close family members, one of those little birds that pick bits out of crocodiles’ teeth or, in this case, between protagonist and reader.

This issue I have been totally sucked in by what you might describe as ‘an enhanced choose-your-own-adventure’ from the iTunes store-Lifeline, written by Dave Justus. Enhanced because, unlike traditional choose-your-own-adventure stories where you pick a path or decide to kick the door down, here you are offering advice, providing support and occasionally arguing with Taylor, a lost soul.

It all starts with a simple transmission of “Hello, can anyone read me?” Taylor, our eyes and ears into the story, has just crash-landed on a moon somewhere in an escape pod after his space ship was shot down. From the very beginning, it FEELS like you’re interacting with someone who is lost, alone and trying not to lose his mind. It is up to you to guide Taylor and provide an objective opinion (and even occasionally looks some things up for him) to help him survive.

As your dialog unfolds, if you ask the right questions, you gradually learn more about Taylor. Apparently, he ‘won a lottery to ride in a spaceship’ but is only ‘there to monitor rats’. Much of his background is left implied because, as you could probably imagine, he’s more focussed on the here and now. Taylor is likeable, and there are plenty of pop-culture references—even an obscure Ren and Stimpy reference at one point—and I really felt I wanted to help him.

But the real trick here is the pacing. Like any good story, you don’t infodump onto the reader. In the case of Lifeline, the story unfolds over several days, provided of course you make decisions that don’t get Taylor killed. All communication is via simple text transmissions, but Taylor is generally not interested in chatting while he’s on a long march to a new location, at which point you’ll get a plain [Taylor is busy].

However it is not as simple as that. What you thought might be a quick hike somewhere might take several hours, whereas occasionally a short while into a long trek I’d spot a notification on my phone because Taylor was busy musing and felt like chatting. It really added to the realism, to the point where I found myself peeking at my phone far more often than I should have at work. Once I only just managed to stifle a noise when I glanced at the phone and saw:

“I’m…just gonna close my eyes for a little while.”

That was the closest I’ve ever been to feeling like I could emphasise with that kid who was in tears at school because their Tamagotchi was confiscated and was going to starve if they couldn’t get to it. I cared about Taylor. On my first run through, I hardly tried any of the more evil options on him. Besides, that guy got snarky sometimes, and probably rightly so.

Happily, if (or when) your lousy advice gets him killed, you can back up to any decision point and try again. Also, once you have completed the story (one way or another) there is the option of ‘fast mode’, which cuts out the waiting. Less engaging, but you get to explore the bits you missed.

The brief bursts of story followed by occasionally long periods of waiting were annoying until I got used to the pacing. But discovering why the ship actually crashed and what horrible secrets the moon held in real time with Taylor felt like sharing a good story with a friend. I still haven’t tried all the options I want to try, including all the bloody-minded advice you can give, but I’m very glad to hear there are two sequels already out.

Posted on May 1, 2016, in Edition and tagged damien smith, edition 26, game review, review. Bookmark the permalink. Leave a comment.