Edition 25: Thou Hast by Moonlight at Her Window Sung by Kristin Janz

Trapped in another world, lured there with lies, the servants of the castle toil in the kitchen at dishes both tantalising and glorious. If not for the beauty of this world, perhaps they could leave… SY

The flames and glowing coals on the three hearths pour heat into the kitchen like the midday sun on the Sonoran desert. I’m wet under my arms, under the cumbersome dress they make me wear, wet between my legs from clinging sweat. But my face prickles in the kitchen’s dry heat, my forehead and nose itch, and when my tongue grazes the corners of my mouth I taste salt.

I bend my head to chopping, my back to the fires, bent over one of the five tables in the center of the room. There’s a servant at every table, cutting or arranging or stirring at the overseer’s direction, and more of us running back and forth to fetch or carry.

One girl reminds me of my best friend back in another life, petite and sloe-eyed; when she’s hard at work she bites on her lower lip and scowls to intimidate the food into submission.

The bearded man at the next table, shucking clams and oysters, looks like someone you might meet on the Appalachian Trail, his unkempt hair tied back in a long ponytail.

But I don’t know their true stories, any more than they know mine. We have little time to talk before the feast, with the overseer circling the room in search of troublemakers to punish, and when we do talk it’s mostly gossip about our captors.

After the feast, it’s all I can do to find my nest of straw and rags before my legs give out beneath me, and all too soon we’re roused from sleep to prepare the next night’s dinner.

I don’t know how long I’ve been here.

I’m cutting satin buds of unopened day lilies, pale orange like peach flesh; mushrooms like concave hand-thrown saucers, oozing milky tears when broken; pungent garlic shoots like long chives, the color of dark pine needles. I dice and cube other ingredients too, fruits and vegetables I had never seen before they lured me to this place, not even in New York’s Chinatown: a lustrous white fruit the size of my clenched fist, bumpy and pitted like an Impressionist painting of a pinecone; succulent stalks that stain my hands indigo; frilled leaves the width of my back and shoulder, a yellow-green so intense they still shine on the bone-white table as if the sun’s light passed through them.

If I escape, I will never cook again, though these curved knives are a dream to handle, made of a gleaming silver metal that never tarnishes or stains, scalpel-sharp. As I attack heaps of fruit and stalk and leaf I imagine hiding the knife in the folds of my dress and walking out one of the two unguarded doors at either end of the kitchen, dark mouths arching open into the winding corridors of the palace, my bare feet soundless on the moon-white paving stones.

They told me I would dance upon those stones, in gossamer silk that the night breeze would caress like a lover, jacinth and chrysolite in my hair. Their lords would vie for my favor, and they would take me riding in the treetops and clouds, and sing to me in voices like wind chimes.

In this inferno, all the music I hear is spoon clanking against pot, fork against spit. The hiss in my ear of the gaunt overseer when I’m not working quickly enough, the slap of other servants’ feet scurrying to carry laden platters to those judged fit to be seen in gracious company.

“You!” the overseer coughs into my ear. “To the fire.”

He wheezes like a man half-dead from emphysema, and his breath is the draft of a musty cellar.

I move quickly to obey, wiping my palms on my apron—too quickly, catching my hip on the table’s sharp edge. I stifle a curse; the overseer doesn’t like to hear human curses. He doesn’t use physical pain to admonish, but our masters have given him power over our dreams. I’d rather be hung from my ankles and beaten.

Fellow servants whisper to me that the overseer hatched from the egg of our mistress, and shared an infant nest with one of the lords. But he was born misshapen and stunted, hair of lank straw and not of gold or silver fire, fingers and toes long and double-jointed, limbs bowed and awkward. Sometimes it happens, I hear, and once such children were left in human cradles to be raised weak, sickly and mean-spirited.

Now I think they find all their servants as grown women and men; no need to raise babies stolen to make room for changelings. Maybe we believe lies more easily now.

The overseer drifts from hearth to chopping table to creamery to washing basin, sending one servant here or there as the work ebbs and flows. He is lighter on his feet than we, and I think his touch would be light, but he never touches us. Some say human skin burns them, but I think they are repelled by us, by the smell of our sweat, by the hair on the arms and legs even of human women.

They can’t stand even the grossness of their own cooking, and so they lure us with whispered false promises here to this smoky hell, to baskets of sun-gold quince, crimson pomegranate, grass-green rapini, all jumbled between the chopping tables in the center of the room. Along the curved walls, shelves are stacked with jars of silphium, spikenard and ambergris; cassia, cardamom, cloves; others I can name only in dreams. If I dare to pause and inhale deeply, I can smell them through the smoke, like a dream of islands across an endless sea, like all the cities you promise yourself to visit someday.

I look up, and see two stars in the indigo sky. The lords and ladies will be here soon, to feast and dance, and my heart races as I remember last night’s spectacle, and the one before.

I think of the scraps they will allow us after their banquet. The overseer has taught us to cook to their tastes, and the memory of every meal I ate at every five-star restaurant is dust compared to the scraps that return to the kitchen after they’ve eaten.

A murmur ripples through the kitchen, from the open doorway at the far end of the room. “They’re coming, they’re coming!”

No one is watching me. I could cross the floor to the nearer doorway in the time it takes to draw a deep breath. I could walk away, without looking back, and neither the overseer nor his masters would follow.

Instead, I rush to spread the food I’ve just prepared in an oval platter of white porcelain, carved with scenes of the hunt, of soaring over treetops on steeds that dance on air.

My work done, I join the other servants, and we climb to the high windows between the hearths and the doorway, the windows that look out onto their banqueting hall. There are footholds and handholds to help us reach the long windows ten feet above the ground, and perches for us on either side of each window. We scrabble for the best spots, shoving and scratching like starved cats. My elbow catches the slight, dark-eyed girl just below her ear. Her foot slips and she falls into two others, and I push myself up from the small ledge of stone she’s lost, up to the highest perch. From there I can see the entire length of the great hall, from stone pavement to mirrored walls to the great gulf of the open ceiling.

As I watch the lords and ladies enter, my fingers grip the edge of the window frame, and I can hear the thudding of my heart over their ringing voices, over the strings and flutes and drums that accompany them. They are tall, and their eyes shine like the jewels in their hair, and when one of the lords glances up and smiles at me, desire for him makes me forget my hunger and thirst.

Tomorrow I will despise myself again, knowing the real reason I can never go back.

But tonight I watch them at their revels. 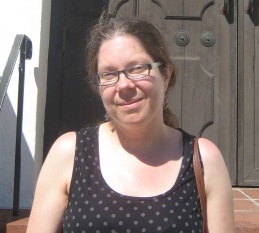 Kristin Janz was born in Vancouver, Canada and since then has moved across the North American continent three times, most recently to Boston on the east coast of the United States. A graduate of the Clarion West Writers Workshop, her fiction has appeared in over a dozen publications, including On Spec, Crowded Magazine, and Futurismic. To learn more, visit her website at www.kristinjanz.com. Along with her husband, writer Donald S. Crankshaw, she is also a co-editor of the anthology Mysterion: Rediscovering the Mysteries of the Christian Faith, to be published in 2016 (www.mysterionanthology.com).