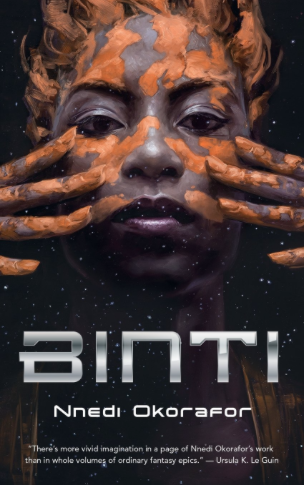 The mere excerpt of Binti, published on the Tor.com website, drew this reader in. A Himba woman, painted in the clay of her homeland, Binti is leaving to take her place among the stars at Oozma University, leaving behind everything that has ever been important to her. She leaves behind a destiny in astrolabe creation and the familial and cultural confines of her loving family on Earth.

Nnedi Okorafor has crafted this coming-of-age story starting in society recognisable as Earth, but leaves it behind quickly for a story of intergalactic conflict, deepened with themes of colonial and academic arrogance. One naïve young woman is at the centre of an incident with far-reaching ramifications of war.

Binti is that story that has you missing your stop, or wanting to leave work to go home and curl up with it in a cosy corner. Not a word is wasted or out of place, though I did find a single word substitution. Binti is instantaneously relatable in those moments of insecurity, that out-of-place feeling everyone confronts at a new start.

The Meduse, the central antagonists, are what you might imagine with a name so steeped in folklore: unyielding, unperturbed by death and violence. However, the shades of grey that Nnedi Okorafor develops in the Meduse creates an interesting juxtaposition to the survivor narrative of Binti. Additionally, because Binti is so alone, the book gives room to explore her internal self, which gives the story much richness of character.

The diplomatic showdown at the climax felt to me like it could have used some expanding, showing some more of the complexity of universities and their people and governance. My only disappointment was that the story arc ended much too soon and I would have enjoyed more time in Binti’s world.

Nnedi Okorafor comes highly recommended and would be suitable for new adults learning about the complexities of the world and older. I thoroughly enjoyed this novella and look forward to reading Ms Okorafor’s back catalogue of works.

Sophie is a scientist, aspiring writer, sci-fi and fantasy nerd. She is an editor with IFWG Publishing and has been Editor In Chief of SQ Mag and SQ Magazine, the previous incarnation. She also contributes book and film reviews. She has returned once more to the wilds of suburban Australia. You can find her in a few different places: @Smoph on Twitter, Sophie Yorkston – writer on Facebook, and at her blogs: Smoph’s Musings and Smoph Writes.