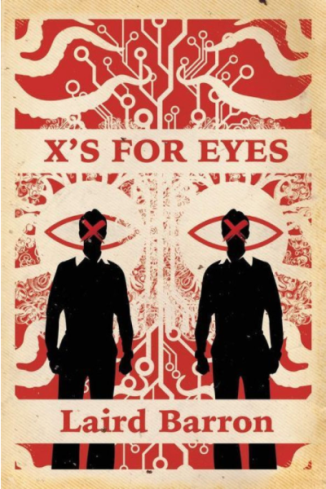 Regular readers of cosmic horror will likely be familiar with Laird Barron. Before I tackled X’s For Eyes, however, I was entirely unfamiliar with his works, having picked up this novella on the back of a recommendation on Facebook. There’s a lesson here that can’t be driven home often enough-if you like a book or an author, give them a plug. The minor signal boost is invaluable for anyone who’s not J.K.Rowling or Stephen King, and it really works.

I’m a big fan of weird fiction and cosmic horror, although I don’t get to read it nearly as much as I’d like. The Lovecraftian feeling of the main characters being bit parts in a much larger story evokes a unique feeling. Although X’s For Eyes wasn’t nearly as weird as I’ve read, it well and truly nailed the cosmic horror.

The story centres around Drederick and Macbeth Toombs, the young, whiskey-drinking, troublemaking brothers and potential heirs to the family business—a huge and mysterious multinational corporation. While the plot is difficult to describe, it essentially kicks off with the boys’ discovery of an advanced space probe crashing to Earth before it was launched, filled to bursting with unfathomable data for another place. Then it gets stranger.

What follows is an intense, often darkly humourous ride involving cultists, rival corporations, madness, dark gods and some especially grisly violence. What really caught me off guard was the way a scene would casually shift from something mundane to slaughterhouse horror almost without me realising it. There is a novel’s worth of action packed in to around 100 pages, and not a word is wasted.

While I haven’t read any of Laird Barron’s other works (yet!), I picked up on a few references to what I can only assume are other stories of his. No doubt I have missed many, but it gave the story a more interwoven feel without penalising me for not being familiar with his other stories.

Overall, this was a great read for fans of noir, cosmic horror or dark fiction, though it’s not for the faint of heart. The bending of causality and handling of paradoxes was skilfully handled. If this novella is any indication of the author’s regular quality, I’ve been missing out for too long.

Editor’s note: While not cosmic horror, SQ Mag has published a delightful piece of Laird Barron’s in an alternate history, which you can find in Edition 18 in Ears Prick Up.