Edition 18: Film Review: The Hobbit: The Battle of the Five Armies 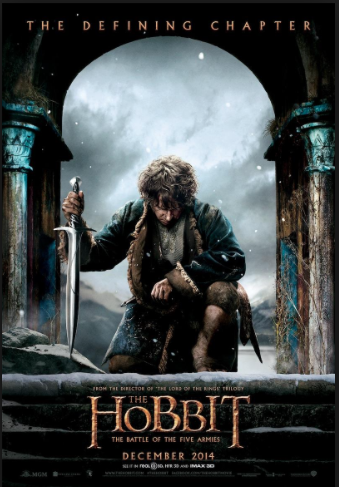 Another year and another J.R.R. Tolkien trilogy with Peter Jackson at the helm draws to a close with The Hobbit: The Battle of the Five Armies. The final film in The Hobbit trilogy has hit silver screens the world over and merchandisers weep into their poor empty hands.

I will admit, that while I have read both The Lord of the Rings and The Hobbit, the challenge of The Silmarillion has not been one I have elected to undertake. It is an admission that I am not well-versed on the parts of Tolkien lore that have fleshed out this children’s story (however, I am still a card-carrying fangirl: I have made my pilgrimage to Hobbiton!).

Who could not have hoped for the culmination of these films? With a stellar cast including Martin Freeman as Bilbo and Benedict Cumberpatch as Smaug; the return of the lovely Ian McKellen as Gandalf and Orlando Bloom as Legolas; with cameos from Cate Blanchett and Hugo Weaving reprising their roles and Billy Connelly as a dwarf; there wasn’t much to disappoint there.

But when Smaug was gone within the first quarter of the film, I wondered where this adaption was going and just how far it would diverge from the book. There were some well-acted scenes of gold lust and paranoia from Richard Armitage as Thorin Oakenshield. The rest of the dwarves had limited screen time and the story lacked any feeling of their former camaraderie.

There were some great battle scenes—who didn’t expect that in a movie titled The Battle of the Five Armies? In no way does Peter Jackson skimp on those. Jackson managed to cover both the grand scale of the battle and the more individual moments on each of the fronts. And as always, the scenery of New Zealand was featured gloriously in the cinematography.

What I did find off-putting were the scenes that unravelled into melodrama and convenience—Bard rides a cart conveniently into a giant/ogre; Legolas bounces up the stones of a crumbling tower. For me, and the audience around me, it lost all its believability and engagement in those moments, when the cinema filled with snickering.

I’m also extremely bored by the continuing trope of female warriors or strong females who then have to be rescued by male characters. Tauriel, a character that doesn’t even exist in the books is incapable of handling one orc on her own, but she’s a warrior elf. Don’t even get me started on essentially immortal elves who have centuries of battle experience but are less hardy than puny humans. Also, Galadriel, one of the most powerful elves, is made to seem so weak compared with the male elves and it’s completely unnecessary to the story.

For what it’s worth, I did respect the token nod to the female fans that was Tauriel (played by Evangeline Lilly), but so much more could have been achieved by writing her in, and much of her relationship with Kili the dwarf (Aidan Turner) was hit and miss.

Watching the movie at an increased frame rate was a mistake too. It reminded me of the early BBC animations, where the action was painstaking painted and then sped up in the film. Parts of the animation definitely lacked the polish of any of the Tolkien movies that had gone before.

Overall, apart from my criticisms, I did enjoy the film in all the delight that a cinema experience can provide. While there were hit and miss moments, the action didn’t falter and the threads of the original story were there, more or less. For anyone who has enjoyed Peter Jackson’s Tolkien adaptions, no doubt this movie will appease your longing for Middle Earth, at the small price of a slice of your gold hoard. And don’t let the dragon distract you for a moment or you might not make it there and back again.

Sophie is a scientist, aspiring writer, sci-fi and fantasy nerd. She is an editor with IFWG Publishing as well as Editor In Chief of SQ Mag and SQ Magazine, the previous incarnation. She also contributes book and film reviews. She is currently living in Vancouver, Canada. You can find her in a few different places: @Smoph on Twitter, Sophie Yorkston – writer on Facebook, and at her blogs: Smoph’s Musings and Smoph Writes.