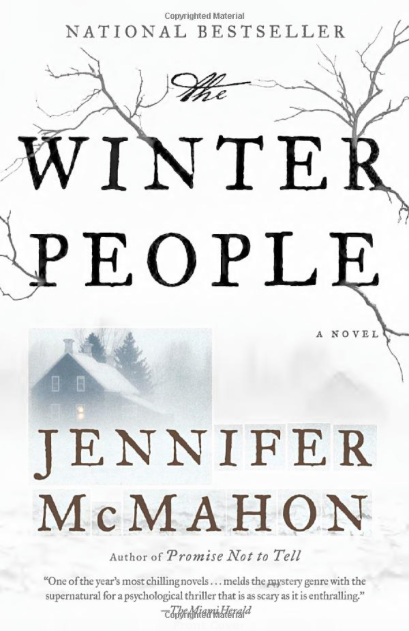 Having been somewhat unsatisfied with the creep factor in the November review book, I decided to try again for the January edition. In my hopeful search, I came across The Winter People by Jennifer McMahon. The title—quite fitting for this time of year in the Northern Hemisphere—sealed the deal. And to my delight, once I ventured into its pages, it provided the creep I wanted.

The Winter People is told from alternating timeframes between 1908 and the present day in rural West Hall, Vermont. Most of the events occur during snowy, desolate winters, under the shadow of an ominous rock formation known as The Devil’s Hand. Rather than being simple backdrops, both the setting and weather were as vivid and mysterious as the characters. This isn’t an easy thing to do, but Ms. McMahon did it well, turning this novel into a truly immersive read.

The book opens with the first entry from “Sara Harrison-Shea’s Secret Diary: Visitors from The Other Side”, and the first line immediately draws the reader in: The first time I saw a sleeper, I was nine years old. Over the years, diary has fueled a number of local legends about ghosts, aliens, portals, and resurrected dead called “sleepers”. We learn these legends aren’t all hogwash as we read of Sara’s life in 1908 through the diary entries and other flashbacks throughout the book.

As Sara’s story unfolds, we learn that she was raised by a widower father and a mysterious Native American woman they called “Auntie”. Auntie taught her useful things such as hunting, herbal remedies, and one very dark secret. As an adult, Sara’s life is one tragedy after another, with stillborn babies, a little girl (Gertie) who dies young, and a farm that won’t grow anything. Because of her grief, Sara makes some desperate choices, which leads to her gruesome demise and affects generations to come.

In modern times, we are introduced to nineteen-year-old Ruthie, who lives with her mom and little sister in Sara’s old farmhouse. Ruthie’s mom suddenly goes missing, and the girls are determined to find out what happened to her. We also follow the story of Katherine, who moves to West Hall to find clues about why her husband visited that town shortly before he died in a car wreck.

Through the alternating viewpoints of this cast of characters, we discover how their stories are all connected to the secrets in Sara’s diary. Motives are questioned, dark mysteries lurk around every corner, and we can’t help but keep turning the pages to find out exactly what happened to Sara and if the modern-day characters will come out of this story alive.

The Winter People is truly a page turner, but only became so after a few chapters in. It took a little while to get the characters and pattern of time switches straight, but once it clicked, I couldn’t wait to finish the book. The climax itself, though not entirely predictable, could have used stronger twists to make things even more surprising. One character’s motivations toward the end seemed inconsistent with their earlier portrayal, which further dampened the impact of the climax.

Beyond those forgivable flaws, The Winter People was a truly enjoyable read with shiver-inducing spook reminiscent of Stephen King’s Pet Sematary. The writing is straightforward and well-paced, with vivid action and strong character voice. Due to some moderately graphic scenes, I’d recommend this book for teens and beyond. You’ll need a warm blanket and a warm drink to ward off the chill as you read. You may also want to leave a light on.