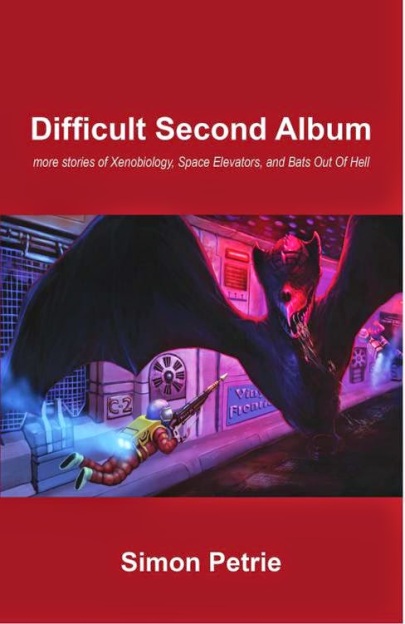 Disclaimer: I’ve followed Simon’s work for a while. For those with a hard copy of this collection, there is actually an excerpt from an old review of mine on the back cover. Far from prompting any bias from me, I had my extra-critical hat on while reading this because the first collection was such a tough act to follow.

As the title suggests, this is Simon Petrie’s second collection of sci-fi (and sci-fi-ish) stories and in spite of any difficulties associated with stepping up and producing a great follow up collection, I’m going to come straight out and say I really enjoyed this book.

It’s an eclectic mix. From the typically bizarre introduction by Über-Professor Arrrrarrrgghl Schlurpmftxpftpfl, we jump straight into a tale of a man dealing with the rights and desires of his increasingly sentient fridge. From humour we jump to a darker and harder sci-fi tale involving a mysterious derelict ship and then to Florence, 1504 for a single page game of one-upmanship between two master artists.

If the flow of stories seems disjointed, it certainly does switch pace and tone very quickly; however I think the collection is better for it. After a bit of heavy, and sometimes impressively detailed, hard sci-fi, a quick, humourous flash or a lighter lark really helps dilute the brain fatigue brought on by so much actual science.

There were a few stories that really got hold of me and sucked me in. There is a running theme, particularly through the harder science stories, of speculation on what alien life might be like and how we might interact with it. I really enjoyed Dark Rendezvous for this reason. Buying a Ray Gun was great fun and very different, being written almost like a script. It is a story of unfolding tragedy and conflict largely driven by, and from the perspective of, a weapons store owner. I really liked some of the more tongue-in-cheek flash stories as well, although Things YOU Can Do…took me a minute to get.

The only really lengthy piece (50+ pages) in the collection is Elevator Pitch, which sees the triumphant return of the long-suffering space elevator manager and part-time detective Gordon Marmoset. This was one of those stories where Petrie was really able to let loose with the groan-worthy puns and dad jokes, so be warned.

Again, I really enjoyed this collection, but a word of warning: while a lot of the humour and concepts can be read and enjoyed by anyone, to really get the most out of this collection a general (and occasionally specific) knowledge of, but not limited to, Star Wars, Star Trek, Lord of the Rings, general history, astronomy, gravity, relativity, evolution, classical mythology and really bad dad jokes would certainly be useful.