← Edition 4: Halo In The Sky by Gerry Huntman
Edition 4: The Mermithergate Grin by S. Marston →

Edition 4: Interview with Daniel I. Russell

After donating his great story “Creeper” to us for SQ Mag 2, we got to pick Daniel’s brains on his career, horror, association membership and what editors are looking for in a story. SY

SQ: How long have you been writing horror and what was your first successful breakthrough?

DIR: I started writing in 2004, beginning with short stories that developed into novels. While I’ve not been as prolific as perhaps I could have been, I feel I’ve been pretty constant throughout that time, with something always on the go be it my own stories or editing the work of others.

I think I’m still waiting for a breakthrough. Feels a bit like being in a band. I’ve played the gig scene and people like what they hear, but I haven’t played the main stage yet. Just waiting for that big break!  Although I am very grateful for where I am today, and I couldn’t have done it without the many talented editors I’ve worked with over the years.

Thinking back, the first success that sticks out in my mind was regarding a zombie story sale to an ezine called From the Asylum, back in 2004. It paid $25 and my story was illustrated and appeared in the annual print collection. While I couldn’t retire from the payment, it was my first illustration and appearance in ink, so it means a lot to me.

SQ: ‘Horror’ has been given a bad press over a lengthy period of time, and the general reader public seem to ignore that Stephen King and other prominent, successful writers, made their names in the genre. ‘Dark Fantasy’ is a recent innovation in the genre parlance – do you think the contemporary form of this term is a reaction to the stigma of ‘Horror’, or is it a legitimate category within the speculative fiction field?

Readers, writers, publishers, we all have our own boundaries into what falls into certain genres. The problem comes, I feel, when the boundaries are strained solely for the benefit of a writer/publisher.  For example, within the Australian Horror Awards community this year there was no shortage of novel submissions, but there were no awards given due to many of the books not being considered horror. Now I’m sure these tales would have contained dark elements, and would certainly fall into the dark fantasy category. Yes, in my eyes dark fantasy is certainly legit. Bookstores seem to be full of dark fantasy, or paranormal fiction as they tend to prefer.

But I don’t consider it to be horror.

I believe horror has a purpose, and that is to unsettle and to sustain a feeling of dread. Some books may contain what are considered horror elements, such as supernatural beings, death, murder, etc, but they lack the horror…bite. Appreciation given that everyone has their own level of acceptance, and I’m sure my children could read a story they would find terrifying that I wouldn’t! But I think that an author knows what kind of book they want to write. If I’m writing horror, I want the reader to dread what’s to come, I want them to be fearful of the dangers just over the page. If a book at least desires to achieve that purpose, then for me that constitutes horror. A full moon and a bit of mist in the background of the cover doesn’t cut it alone!

SQ: In your opinion, what is the most common mistake authors make when writing horror?

DIR: Clichés, especially with a twist ending. Reading for Necrotic Tissue and Midnight Echo, I saw the same handful of stories over and over again. No matter how well a story is written, if an editor is receiving the same plot over and over, it’s not going to get picked up. And maybe it’s an unfair advantage to be an editor and see what kind of popular stories are currently doing the circuits so you can avoid them! Twists such as ‘turns out she’s a vampire’, every horror editor worth their salt will have seen countless times.

If you’re writing within a traditional subgenre, ask yourself if your piece is individual enough to stand out from the crowd.

SQ: Who would you list as your favourite horror author and what is it that makes them stand out for you?

Richard Laymon made me want to write. I was a big fan through my teenage years and his straight-forward style made the art accessible to me when I started out. When I began writing, I remember my aim was to write with the lightning fast pace of Laymon, but with the grotesque imagery of Clive barker. Samhane was the result of that little endeavour.

Apart from the usual horror writer name dropping, I’ve started to read further and further outside my genre, especially with more classical literature. A writer’s toolbox must always be filled with a variety of devices! I enjoy Stoker and particularly Wells due to their controlled pacing and the ideas on show. Wonderful stuff that stands up today.

SQ: How have you found that involvement in the AHWA has helped you as a writer and why would you recommend membership?

DIR: I think we need to be clear about writing associations as some writers go into them with the wrong expectations. What the AHWA offers is a great bunch of talented people from all over Australia and New Zealand. We have authors, editors, publishers, readers and artists at various levels, and the wealth of helpful advice that comes with it.

Personally, and thanks to the AHWA, I’ve met people I wouldn’t have met otherwise, and been introduced to some amazing works of literature and publishers that I rank among the best in horror fiction.

And we have Midnight Echo. 😉

Other things we offer are a mentoring scheme, advertising (free in Sinister Reads and discounted in Midnight Echo), critiquing, giveaways and competitions and just the whole social side. Being a member of the AHWA makes a fun convention even better!

SQ: As an editor for Midnight Echo, the AHWA’s magazine, and Necrotic Tissue, what advice would you give emerging horror writers?

DIR: Aim that every new story you write will be the best one ever, and try and do something new with each piece. I’m not suggesting a reinventing of the wheel here, but experiment with tenses and styles. If your story is set in Victorian England, then try and nail the language and compare it to writing from the time to get the flavour. If your protagonists are usually clean cut hero types…make the next one an arsehole! Does he still hold the reader’s attention?

Challenge yourself with each story. Never grow complacent. If that story gets you nowhere…learn from it and write another!

Daniel I. Russell was born near Wigan in 1980 and has soiled various anthologies, magazines and ezines such as Dead West, Midnight Echo and Pseudopod. His newest novel, The Collector: Mana Leak (Dark Continents Publishing), was released in May 2012. Daniel was also on the cover of Andromeda Spaceways Inflight Magazine #43, and has released the novel Samhane (Stygian Publications) and novella Come Into Darkness (Skullvines Press). He is Vice President of the Australian Horror Writers’ Association, the associate editor for the Necrotic Tissue print magazine, and lives in Western Australia with his partner and three children. Daniel is represented in Europe by Michael Preissl Literary Agency.Daniel’s Blog Site

Come Into Darkness, by Daniel I Russell (Skullvines Press, 2011) 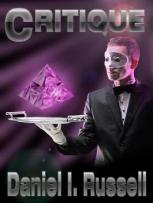 Posted on April 19, 2014, in Edition and tagged daniel I russell, edition 4, interview. Bookmark the permalink. Leave a comment.

← Edition 4: Halo In The Sky by Gerry Huntman
Edition 4: The Mermithergate Grin by S. Marston →