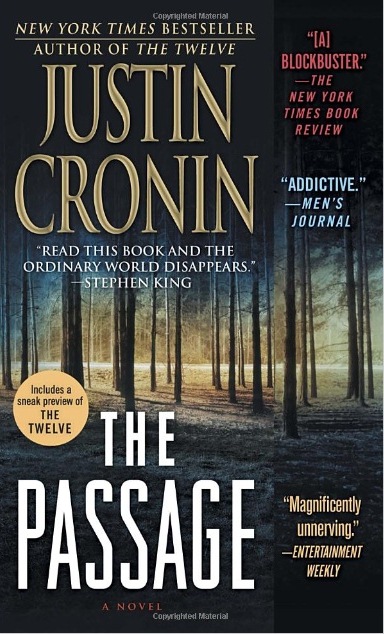 It starts as it always starts; with a need for power. Deep in the jungles of Bolivia, a scientist hunts the secret of health and longevity. Aided by the American military, the mission takes on an entirely different purpose.

A pair of FBI Agents, Wolgast and Doyle, lead the next stage of the adventure. Their mission is to recruit death row inmates to Project Noah, a largely unspecified, last chance exit off death row. When orders come in to pick up an abandoned girl, the unethical nature of their mission hits home and compromises their loyalty. Taking the girl from the protective arms of nun Sister Lacey, the pair end up chased cross-country. On their journey, Agent Wolgast becomes little Amy’s protector. But forces beyond his control intervene and Amy is given a version of the Bolivian virus from the secret Colorado facility. All hell breaks loose and the other strains of the virus are launched upon the unsuspecting public.

In a walled community, almost a century on from the initial virus exposure, life goes on mostly as it did before the apocalypse. The Watch, a special group of protectors, man the walls to protect those within, aided by the bright lights left by the almost mythical military. Their batteries are dying slowly, and Michael, the technician, is looking for answers outside the walls. On an expedition beyond the walls, one of the Watch, Peter, is saved from the “virals” by a speechless fifteen-year-old girl. Unsure of how to tell anyone, he keeps it a secret, which works only until she shows up outside the walls during a viral attack. What follows is the undoing of the colony, both through dissolution of its community and the workings. A small group leaves, the social chaos leaving them to seek out a different future, the wider world beckoning.

At the heart of this story is the abandoned girl, Amy, and the people who come to her. I have to say that I adore that a girl heroine was written because it was requested by the author’s daughter. Amy starts the story as the weak child to be protected, but it changes as you move through the story. She certainly does not do it alone, and I think that is a great comment to be made—nobody is truly alone.

Justin Cronin says his book is about journeys, and it definitely comes through in The Passage. Each of the main characters has their own journey to embark upon, even within the greater epic, and sometimes the result is unexpected. Each of the sections in this book is equally engaging, though I found the email format of the first part an unusual experience but not an unlikeable one—the ability to create a relationship through one-sided emails is truly a testament to Cronin’s writing.

Let’s say it openly—this is a book about vampires. However they came about, and whatever the author would prefer not to call them, they’re still vampires. But these are the scariest vampires I’ve ever encountered in fiction.

There are a few clichés, in that there’s an unethical, secret section of the military out for political gain and power. Some of the subsidiary characters, especially those of the military, are a bit stock standard; however, for the most part, the characterisation is nuanced and regardless of how you feel about each character, you want to know more of the story and how they came to be a part of it. Cronin has picked some characters whose past makes you instinctively want to hate them, but you cannot help but grudgingly accept their unique humanity. The setting is entirely US-centric, despite references to the virus becoming global, but that makes sense in the landscape of the future, where technological knowledge and access has been mostly obliterated.

I can only say that I have not felt so involved with a series of characters and their well-being for a long time. I cannot recommend this book highly enough. It has rekindled my love of vampire fiction. As the second in the trilogy, The Twelve, has recently been released, I look forward to spending my summer holiday getting involved with the story once again. Look for my review of it in SQ Mag Edition 7.

Justin Cronin is the New York Times bestselling author of The Passage, Mary and O’Neil (which won the PEN/Hemingway Award and the Stephen Crane Prize), and The Summer Guest. Other honours for his writing include a fellowship from the National Endowment for the Arts and a Whiting Writer’s Award. A professor of English at Rice University, he lives with his family in Houston, Texas. Check out the trilogy at http://enterthepassage.com/author/ or follow him on Twitter: @jccronin.

Sophie is a scientist, aspiring writer, sci-fi and fantasy nerd. She is an editor with IFWG Publishing and has been Editor In Chief of SQ Mag and SQ Magazine, the previous incarnation. She also contributes book and film reviews. She is currently living in Vancouver, Canada. You can find her in a few different places: @Smoph on Twitter, Sophie Yorkston – writer on Facebook, and at her blogs: Smoph’s Musings and Smoph Writes.