← Edition 10: Shoe Shine by Robert Datson
Edition 10: That Blasts the Roots of Trees Is My Destroyer by David Halpert → 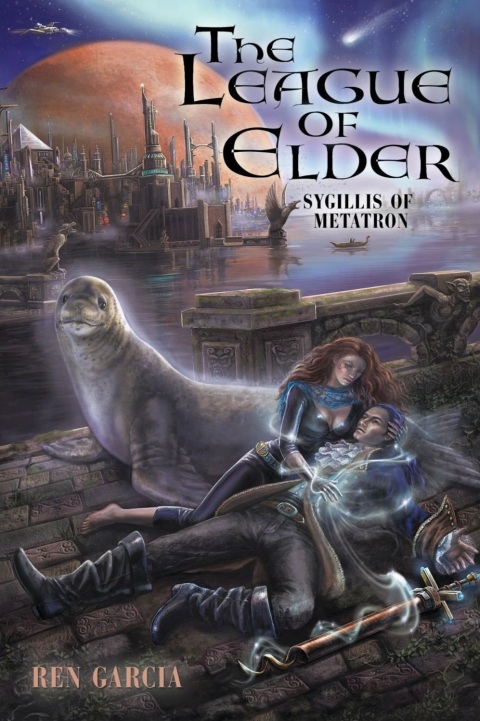 In looking for another steampunk variant to review for this edition, I had the timely fortune of sharing a table with a writing friend, Ren Garcia, at this year’s Fandom Fest in Louisville, KY. I had purchased this book at the 2012 event and hadn’t read it yet (shame on me). While he shared with me all about the League of Elder series, I knew I had to jump in, and I’m happy that I did.

This first book (of several), chronicles the not-of-this world adventures of Captain Davage, Lord of Blanchefort, as he patrols through space in his starship, the Seeker. He’s made aware of a prisoner who’s been brought aboard the ship by the “Sisters”, who are like interstellar guardian priestesses. This prisoner happens to be a “Black Hat”, a VERY formidable opponent who is basically a minion of the “Black Abbess”, the Sisters’ mortal enemy. All Black Hats happen to be female, and this one is named Sygillis of Metatron.

The Sisters kindly ask Captain Davage’s permission to execute the prisoner, firmly holding to the belief that the only good Black Hat is a dead one. However, not one to take any execution lightly, Davage uses one of his many “Gifts”, this one of “Sight”, to look into the brig and get a closer inspection of the prisoner. He is stunned to see that this Black Hat looks exactly like his dead friend, Captain Hathaline. Intrigued by this similarity, Davage, against the Sisters’ warnings, decides to go in and face this Black Hat himself, to solve the mystery of why she looks like someone he knows to be dead and buried.

And, that’s where the real fun of this imaginative sci-fi/steampunk series begins. It’s also beautifully illustrated with several drawings from talented artist Carol Phillips, so you get not only an epic story, but visual candy to boot.

From the start, the action, suspense, and unanswered questions kept me reading. I had to know exactly who this Sygillis of Metatron was and how Captain Davage would survive meeting her face-to-face. The characters themselves are many, but very well-defined and unique. Their connections drive the story. The most memorable are Davage himself, with his blue hair and amazing Gifts; the telepathic and mysterious Sisters; the dark and powerful Sygillis, who goes through an amazing transformation over the course of the book; and Kilos, the tall, tough, and fearless marine, Davage’s right-hand woman, so to speak.

While the story itself carries out in a well-paced sequential manner, bits of backstory are expertly woven in as their own chapters. While in many books, those sections can seem like info-dumps, Mr. Garcia employs them well so it gives us interesting and useful insight into the hidden relationships behind the main characters.

The writing is good, though a bit uncertain in spots, reminding me of a pilot for a new (and good) TV show, as though the author is also learning about the characters as he writes them. There are bits of technical jargon and battle description that I skimmed through, which I tend to do in sci-fi stories. Being the grammar Nazi that I am, I also noticed a verb tense issue, where most instances of “will” should have been “would”. However, it didn’t detract from the magic of this plot.

Yes, I said magic, because the imagination involved in the world-building and character creation is beyond belief. Kudos to Ren Garcia for such vivid ideas! The original content carries this story through a twisting, twirling flight of fancy that glides gracefully to a satisfying conclusion.

If you’re looking for something in the sci-fi/steampunk realms that in itself stands as a complete story with no frustrating cliffhangers, yet hooks you in to make you want more from an original and epic world, then grab a copy of this book. You’ll be glad you did.

← Edition 10: Shoe Shine by Robert Datson
Edition 10: That Blasts the Roots of Trees Is My Destroyer by David Halpert →