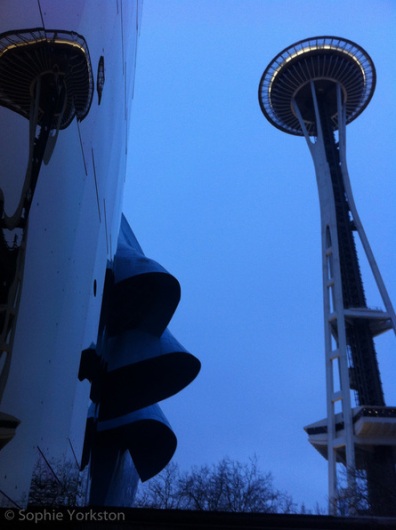 When you walk around the huge chromatic and irregular surfaces of the EMP museum, you could be forgiven for thinking it some sort of blob of abstract sculpture to decorate the Seattle Centre parkland, in the centre of downtown Seattle. Designed by Frank Gehry, it has had its share of detractors and admirers, seeing in it the reflection of smashed guitars. Me, I just saw the shiny reflections and was excited by the prospect of the treasure trove inside.

Having only heard of the museum’s existence from tourist guides once I entered the city, I was keen to see what their collections entailed. The EMP Museum started life as the Experience Music Project and Science Fiction Museum and Hall of Fame (EMP|SFM), later shortened to plain EMP. It brings together several elements of pop culture: music, cinema and television. Particularly, I was interested in the exhibits that pertain to my work (and loves) in speculative fiction and their related on-screen representations.

From the moment I walked through the doors, I was drawn to the great wooden door, complete with knocker and appropriately iron-appearing scrollwork. Opening up into the first area of the Fantasy: Worlds of Myths and Magic exhibit, straw litters the floor and the walls are formed like rough-hewn stone. It begins the discussion about archetypal characters from fantasy fiction, and their roles in the narrative. Central to the room, there’s a display where you can sort through these archetypes and be shown examples from popular novels or television shows. I also wish I had more time to spend with the archetypal fantasy characters display, but there was only one interactive screen and many other visitors to share with. A little doorway is a kid sized escape through to the next section, but for the adults, there’s huge, faceted metal tree-type sculptures to walk through.

The whole exhibit is filled with costumes from popular films and original manuscripts. It is exactly as I wished, having costumes from one of my favourite fantasy movies, The Princess Bride. There’s also a myriad of props, like Susan’s bow from the recent The Lion, Witch and the Wardrobe movies, which are intricately detailed and displayed to full effect.

In a room showing off the full extent of some fantasy epics, one screen has fantasy authors discussing their work and writing. One had a really ingenious mount that consisted of insect eyes and had interviews from those involved in screen fantasy productions.

At the entry to the basement, where the Icons of Science Fiction and Can’t Look Away: The Lure of Horror Film exhibits are housed, is the Science Fiction and Fantasy Wall of Fame, a collection of images of people who have contributed to these genres, either in print, art or film.

You enter Icons of Science Fiction through a tube of lights, like images of faster than light travel in movies. Some iconic pieces dominate the exhibits, particularly props from famous science fiction television shows and cinema. Kirk’s chair from Star Trek, Daleks from Doctor Who, Neo’s monk-like costume from the Matrix; props from varied shows and movies abounded. There was a green screen allowing play with multiple factors to demonstrate their use in science fiction film. One interactive tablet allowed visitors to investigate the different subgenres of science fiction, but it had a limited number of examples programmed in to link to. Sadly, the exhibit was smaller than I thought it should be, and had less detail and discussion of the science fiction genre in general.

Walking into the Can’t Look Away: The Lure of Horror Film exhibit was quite a change from previous exhibits: a darkened room, splattered with red, full of shadows cast by knotted and thorny booths, a shrieking in the background. Curated by some of the preeminent names in horror film—Roger Corman, John Landis, Eli Roth—it is an expansive and inclusive exhibition. In individual booths, crafted to look like twisted plants, you can watch selections of iconic horror films. There’s a display of famous pieces, like the chair from Hostel, the murderer’s mask from the Scream movies. One wall dominates, describing the canon of creatures like zombies and vampires. There’s even original manuscripts: Bram Stoker’s Dracula original edited draft is on display.

There’s much more to the museum than the three major exhibits that I managed to visit. A large section devoted to music, appropriate for the home of artists like Jimi Hendrix and the grunge sound, and there’s a Lego architecture exhibit currently, as well as rotating travelling exhibits.

It was a unique opportunity to see some fantastic pieces from film that you might not otherwise see, to appreciate the finished work that artists create just for one movie or series. Given that EMP is a pop culture museum, many of the works exhibited or referred to are recent or currently popular fiction and film; when there is such a wealth of speculative fiction material out there, it seems a shame that the selection is so limited, particularly in their science fiction and fantasy exhibits.

That being said, the way the exhibits were set out was a testament to how the exhibitors cared about the topic they approached. Each was highly appropriate, lovingly crafted and full of detail and eye-catching display. Professionals consulted were appropriate and the original manuscripts interesting to see.

As one of few organisations with a dedicated speculative fiction display, Seattle’s EMP Museum is definitely worth a visit, partly because the museum clearly loves these genres and also because if we want to see more dedicated exhibits like these, we have to support them. It’s also a great way to spend a couple of hours and will cost you less than a trip up the Space Needle (if you buy online).

Photographs Taken at the Museum 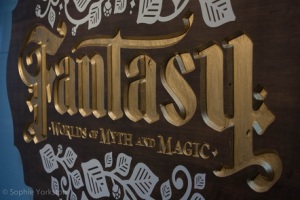 Part of the Fantasy: Worlds of Myth and Magic Display Mask from Labyrinth.

Prop from the Alien movies 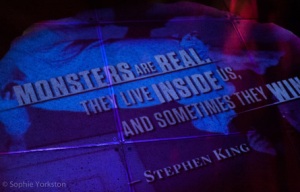 Pages from the original Dracula manuscript. And boy, the editing, cut and paste was literal 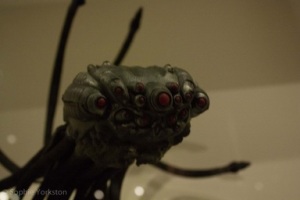 Sentinel model from The Matrix 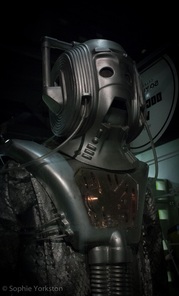 Cyberman, of Doctor Who fame 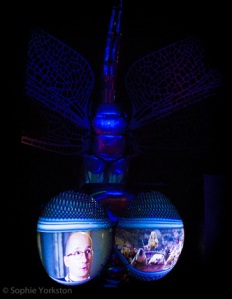 One of the screens inside the Fantasy: Worlds of Myth and Magic exhibition 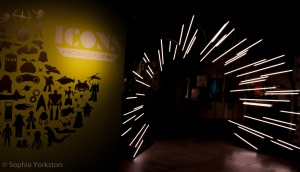 Details of the arrow points from Susan’s bow and arrow from the
recent cinematic release of The Lion, The Witch and The Wardrobe

Sophie is a scientist, aspiring writer, sci-fi and fantasy nerd. She is an editor with IFWG Publishing and has been Editor In Chief of SQ Mag and SQ Magazine, the previous incarnation. She also contributes book and film reviews. She lives in Melbourne, Australia.